PM: Jerusalem will not tolerate a breach of the border, an attack on Israel or its citizens. 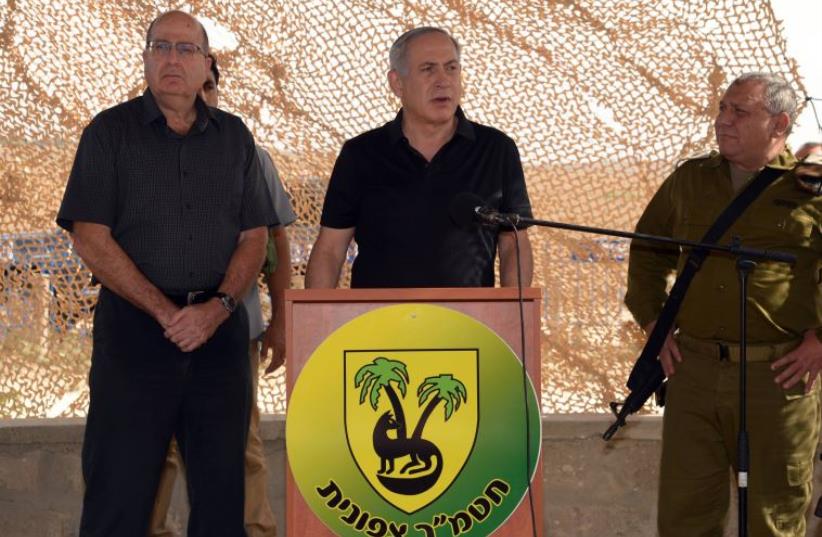 Prime Minister Benjamin Netanyahu (C) visits troops near Gaza border with Defense Minister Moshe Ya'alon (L) and IDF Chief of Staff Lt.-Gen. Gadi Eisenkot (R) (file photo)
(photo credit: CHAIM TZACH/GPO)
Advertisement
With Israel currently engaged in a three-front security battle, the Gaza front is “under control,” Prime Minister Benjamin Netanyahu said Tuesday, at a lookout point into Gaza near the IDF's Gaza Division headquarters close to Kibbutz Re'im in the western Negev.“We are carrying out a struggle over Israel's security on a number of fronts,” he said, accompanied by Defense Minister Moshe Ya'alon, IDF Chief of Staff Gadi Eisenkot, and top IDF officials.
PM Netanyahu visits troops near Gaza border
Netanyahu enumerated these fronts as “first of all, in preserving the quiet on the Temple Mount; secondly, in Judea and Samaria; and thirdly, in Gaza.”Each one of these fronts could ignite and set the other ones ablaze,” he said, adding that his impression from his visit South is that the “the situation here is under control.”Netanyahu said that on each front the government's policy is to bring about calm through acting against those carrying out attacks in in a “responsible and proportionate manner, with force - a great deal of force where needed.”It was made clear to Hamas that Israel holds it responsible for everything happening inside the Gaza Strip, and coming out of the region, and that Jerusalem will not tolerate a breach of the border and an attack on Israel or its citizens, the prime minister said.“My impression is that this message was heard loud and clear,” he added.