Gaza’s unemployment rate stands at more than 40 percent, and there are no economic growth engines to speak of in the Hamas-ruled Strip. 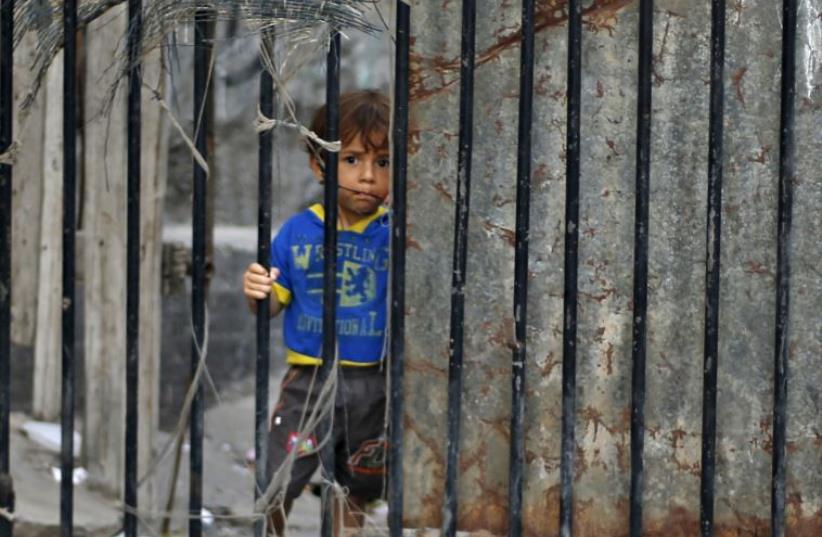 A Palestinian boy looks through the gate of his family's house at Shatti (beach) refugee camp in Gaza City
(photo credit: REUTERS)
Advertisement
The ongoing economic crisis in Gaza could lead to a renewed security escalation in the South, OC Military Intelligence Maj.-Gen. Herzl Halevi told members of the Knesset Foreign Affairs and Defense Committee on Tuesday.Gaza’s unemployment rate stands at more than 40 percent, and there are no economic growth engines to speak of in the Hamas-ruled Strip.Hamas, for its part, invests heavily in rocket manufacturing and combat tunnel digging, but has offered no effective solutions to alleviating the difficult economic situation.Despite its preparations for the next round of fighting with Israel, Hamas remains deeply deterred, and since the 2014 conflict, it has kept the truce, not firing a single rocket or bullet at Israel – though ISIS-affiliated small groups have, against Hamas’s will.During the closed-door session on Tuesday, Halevi briefed members of the committee on the latest security developments and assessments held by Military Intelligence and touched on recent developments in the Gaza Strip.According to assessments in the IDF, Hamas’s Izzadin Kassam military wing seeks to strengthen the alliance with Iran, and receive more funds and battle doctrines from it, while the political wing, headed by Khaled Mashaal, is interested in moving closer to Iran’s regional arch-rival, Saudi Arabia.Meanwhile, Hamas’s military wing continues to dig defensive and offensive combat tunnels, and work on rocket production.Within the IDF, there are concerns Hamas could try to exploit instability in the West Bank caused by the future departure of PA President Mahmoud Abbas, who lacks a clear successor at this time.A key Israeli goal is to prevent Hamas from rising to power in the West Bank. Meanwhile, the Shin Bet foils West Bank terrorist cells orchestrated by Hamas on a near nightly basis.The IDF believes there is a high potential for additional escalation in the West Bank, currently plagued by unorganized terrorism in which individuals or small groups independently decide to attack Israelis.The defense establishment has identified a number of restraining factors that can douse the tensions, such as increasing the number of work permits for Palestinians.More than 100,000 Palestinians work in Israel and in settlements, dissuading them from joining the ranks of rioters and terrorists, according to assessments.