Gazans enjoy a movie for the first time in 3 decades

Islamists often consider movies to be ungodly but this film had the approval of Hamas. 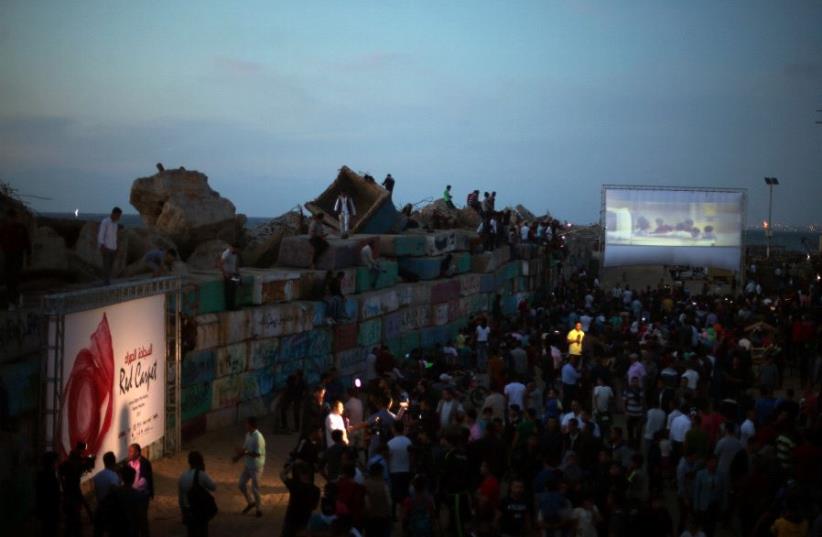 A film is screened during the third edition of the Red Carpet Film Festival, at the seaport of Gaza City May 12, 2017.
(photo credit: REUTERS)
Advertisement
Gaza residents were able to enjoy a film in a proper cinema for the first time in 30 years. Ghada Salmi organized a one night only “symbolic” event for Gaza residents at Samar Cinema on Saturday night.
According to the Guardian, Samar Cinema opened up for one night only to screen a film about Palestinians in Israeli prisons. 300 men and women stuffed into an unsegregated crowded room without air conditioning on a hot and humid night to enjoy some story-telling.Jawdat abu Ramadan, a member of the audience, said, “We need to live like humans, with cinemas, public spaces and parks.”Some films have been shown in Gaza but only in private screenings at rented out halls and not in proper cinemas.  Islamists often consider movies to be ungodly but this film screening was approved by Hamas. This approval is part of a larger change from the ruling party which also allowed a film festival show casing human rights issues in Gaza to take place the Gaza City Port. Cinemas in Gaza were shut down after the first intifada. A fire was set at a cinema in 1987 that was believed to have been started by Islamists. Following this incident. cinemas were afraid to screen movies.
Advertisement
Subscribe for our daily newsletter