On Saturday, the IDF released grisly pictures of the blood-soaked kitchen where the Salomons were murdered, as well as one of the terrorist lying facedown on the bloody floor. 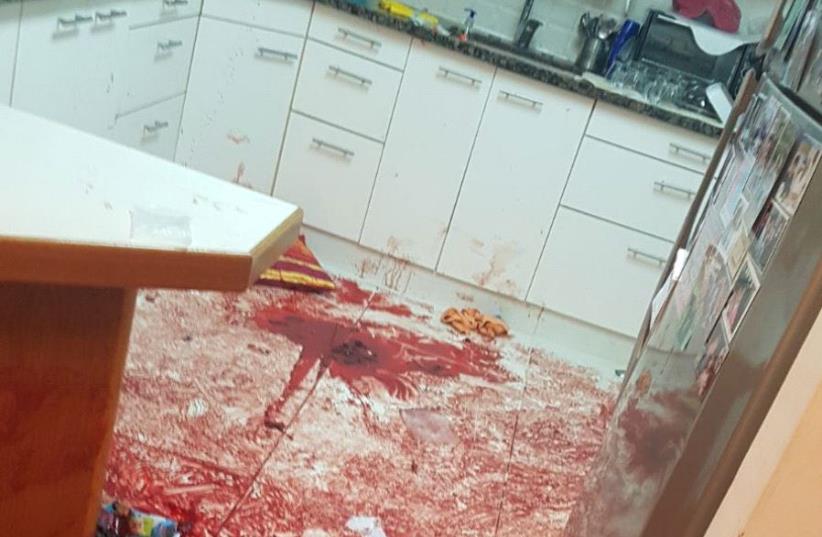 Site of terror attack in Halamish, July 2017
(photo credit: IDF)
Advertisement
The IDF’s release of gory pictures from the scene of the murder Friday night in Halamish of Yosef, Chaya and Elad Salomon has left some in the country’s public diplomacy apparatus uncomfortable and concerned the pictures give Israel’s enemies cause to celebrate, while weakening the resilience of the Israeli public.The question of which pictures to release from a terrorist attack is a complex one that involves many different considerations including preserving the dignity of the victims, the privacy of the family, and not wanting to compete with the Palestinians about who could display more gruesome images.On Saturday, the IDF released grisly pictures of the blood-soaked kitchen where the Salomons were murdered, as well as one of the terrorist – Omar al-Abed – lying facedown on the bloody floor, his hands tied behind his back.Ofer Gendelman, the Prime Minister’s Arab Media Spokesman, posted that picture on Twitter, under the caption in Arabic, “This is the terrorist lying on the floor in the kitchen of the house, full of the blood of three innocent family members slaughtered by this predatory animal.”
Three Israelis were killed in a stabbing attack in Halamish, July 21, 2017 (Reuters)
Two different sources who deal in public diplomacy said they do not ever remember Israel releasing a similar picture.One source said the decision to release the photo was taken by the IDF Spokesperson’s Unit, which has a new head, Brig.-Gen. Rone Manelis.Asked if the release of the picture constitutes a new policy, the IDF spokesman said that the army releases pictures “according to relevant considerations.” The spokesman would not say anything beyond that, or what those considerations were.Israel has a National Information Directorate, situated in the Prime Minister’s Office, where policy regarding messaging is decided. That body, however, did not meet to discuss a new policy regarding photos from terrorist attacks, or what pictures to release from the Halamish atrocity.Officials involved in the issue said that this was not the first time that pictures from the blood-spattered scene of terrorist attacks have been put out. For instance, a picture of the room, and bloodied bed, where Yaffa Ariel, 13, was killed in Kiryat Arba in 2016, were released; as were photos of the blood-drenched floor of the synagogue in Har Nof following the attack there in 2014 that killed five people; and the home in Itamar where five members of the Fogel family were murdered in 2011.Had there been a discussion at the National Information Directorate about the pictures, one official said, it is likely that there would have been some push back.

Site of terror attack in Halamish, July 2017 (ZAKA).The source said some are opposed to releasing these types of photos except in the most extreme cases, as they could – if released too often – undermine their effect and lead to the “banalization” of these types of horrific attacks.The official said that these pictures do not cause Israel to garner sympathy abroad, since the Palestinians can bring numerous pictures of their own that are difficult to look at. The photos also add, the source maintained, to a narrative of “victimization,” which he said goes against Israel’s national security interests.The official referred to the famous Warsaw Ghetto photograph of a boy with his hands up eyed by an SS trooper with a machine gun, and said he never wants to see a photo of another Jew humiliated like that. “Nothing is worth that,” he said. “Showing pictures of our blood makes our enemies happy, and demoralizes us.”On the other side of the argument, however, are those who argue that the pictures are important because they show the world the horrors that Israel is up against, and also present visualizations of the terrorists’ crimes to push back against those expressing understanding or sympathy for the terrorist’s cause.