During the early morning hours on Tuesday, IDF soldiers cordoned off a 100-square-meter home in the al-Ashqariyya area of Beit Hanina. 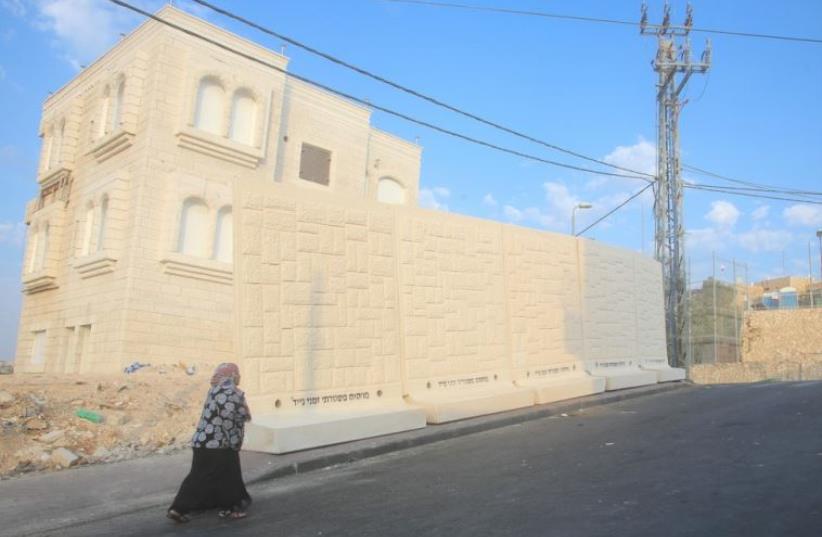 A Palestinian from the east Jerusalem neighborhood of Jebl Mukaber walks past a barrier separating the village from the Jewish quarter of Armon Hanatziv
(photo credit: MARC ISRAEL SELLEM)
Advertisement
Government bulldozers manned by an IDF unit razed two illegally constructed Palestinian homes in the east Jerusalem neighborhoods of Silwan and Beit Hanina on Monday and Tuesday, respectively, according to Palestinian media.During the early morning hours on Tuesday, IDF soldiers cordoned off a 100-square-meter home in the al-Ashqariyya area of Beit Hanina, which belonged to Majdi Jamal Edrees, the WAFA News Agency reported.Majdi told WAFA that the army posted the demolition notice on his residence two days earlier, adding that he promptly contacted his lawyer, who unsuccessfully lobbied the Jerusalem Municipality’s City Council.“We have been trying to get all needed permits and documents, but they kept placing impossible conditions and requirements,” he said. “Our demolished building was completely furnished, ready for us to move in; its cost was more than NIS 90,000.”  “We had to buy a large mobile home, and bolt it onto the ground because it became impossible for us to get a construction permit from Israel,” Majdi added. “And today they came and demolished it.”On Monday morning, an IDF demolition crew also razed a Palestinian home being illegally built in Jabel Mukaber.The Wadi Hilweh Information Center in Silwan (Silwanic) in Jerusalem claimed the soldiers surrounded a building, belonging to Soheib Ja’abees, and demolished it without any prior warning.The family has one daughter, who is imprisoned for attempting to attack soldiers in November of last year.Ja’abees said he filed the necessary paperwork to the City Council eight months ago, but the council kept delaying approval. He claimed that the family never received a notice from the City Council regarding intentions to demolish their property.Jerusalem Mayor Nir Barkat has repeatedly stated that all structures built in the capital without a construction permit are demolished regardless of location, or the whether the owner is Jewish or Arab.