The pilot project, which opens its doors in September, was funded by the Regional Cooperation Ministry. 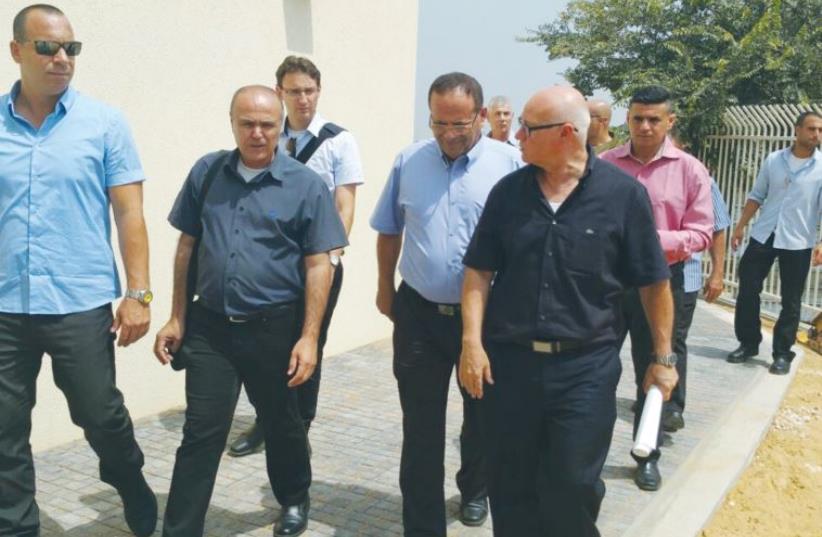 DEPUTY REGIONAL Cooperation Minister Ayoub Kara (center, glancing down) tours the business center near Tulkarm.
(photo credit: RAFI HALABI)
Advertisement
A business center built on the Green Line, at the Sha’ar Ephraim crossing, could boost Israeli-Palestinian economic ties.The pilot project, which opens its doors in September, was funded by the Regional Cooperation Ministry.The center was designed to allow Israelis and Palestinians meet without requiring permits, Ayoub Kara (Likud), the deputy regional cooperation minister, told The Jerusalem Post on Tuesday.The building is situated so that Palestinians can enter from the West Bank and Israelis can enter from areas within the Green Line by simply arriving at the doors and undergoing a routine security check.“It will be as easy as going to the mall,” Kara said.Visitors to the center can reserve rooms for meetings, to sign contracts or finalize business deals. If the model is successful his office will open other centers near Jerusalem and Jenin.Cooperation and improved ties with the Palestinians and the larger Arab world starts with the economy, Kara said, adding that such liaisons are needed to fight the greater danger of extremism in the region, such as Iran.The Druse MK and deputy minister said that he believed improved cooperation between Israelis and Palestinians should start with small projects like the new business center.He added that he is working on ways to bring Arab tourists to Israel.Israeli-Palestinian Chamber of Commerce CEO Baruch Mazor said that the new center at Sha’ar Ephraim would boost joint business ventures that he estimates have a NIS 16 billion annual turnover.“It is a great project. It is very effective and very clever,” Mazor said. He explained that receiving the necessary permits to travel between the Palestinian territories and Israel, is one of the biggest hurdles that business people face.The pilot project is exactly the kind of simple and effective proactive initiative that should be encouraged, he said, adding that it will enable business people “to communicate without any problems or difficulties.”On Monday, Kara met a Palestinian delegation in Jerusalem to discuss the project. The delegation included Palestinian Authority adviser on religious affairs Mahmoud al-Habbash and the PA official in charge of relations with Israeli-Arabs, Muhammad al-Madani.On Tuesday, Kara visited Gush Etzion and met with the head of its regional council, Davidi Perl. He also met the mukhtar of the Palestinian village of Khirbet Zakaria.Kara promised to provide him with NIS 1 million to address the village’s sewage problem and pledged to help it obtain building permits.