According to a statement from the White House, peace between Israel and the Palestinians is not the only topic on Trump’s agenda for the region. 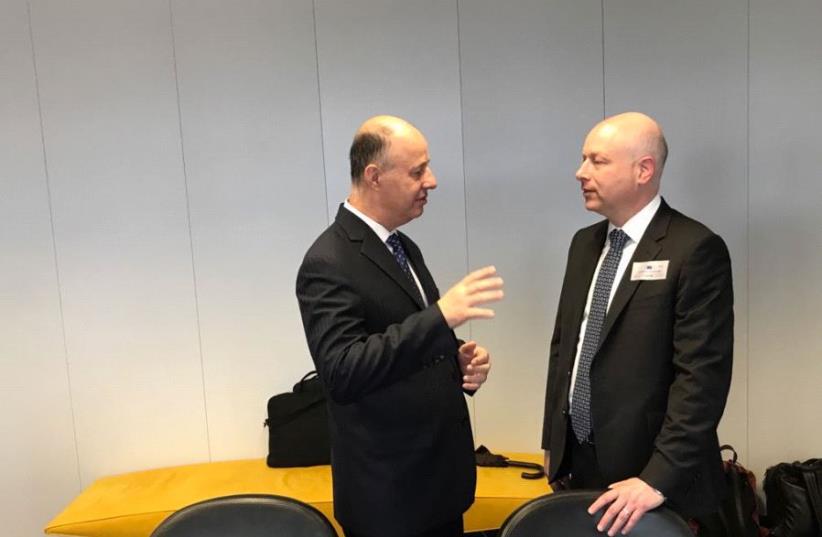 Jason Greenblatt and Tzahi Hanegbi
(photo credit: Courtesy)
Advertisement
United States special envoy Jason Greenblatt held a high-level meeting in Brussels with Israeli and Palestinian ministers on Thursday to discuss economic initiatives in the West Bank.The unusual gathering with Regional Cooperation Minister Tzachi Hanegbi and three Palestinian ministers took place on the sidelines of a session of the Ad Hoc Liaison Committee, which meets twice a year to determine donor funding for projects to help Palestinians in the West Bank.“I do not remember this kind of US involvement in the past,” Hanegbi said of the session.Hanegbi said that the countries that attended the committee meeting included some with which Israel does not have diplomatic ties, such as Saudi Arabia and Kuwait. The meeting was hosted by Norway and was opened by European Union foreign policy chief Federica Mogherini.It took place just one day after US President Donald Trump announced that he is renewing the Israeli-Palestinian peace process, which has been frozen for more than three years.
Trump Middle East Envoy Jason Greenblatt meets with PA President Abbas on March 14, 2017 (credit: REUTERS)
When Trump is in Israel later this month, he plans to meet with Prime Minister Benjamin Netanyahu and Palestinian Authority President Mahmoud Abbas.But the White House did not say whether Trump would hold a trilateral meeting or separate conversations with the two leaders.“I look forward to discussing with President Trump the best ways to advance peace,” Netanyahu said on Thursday.“I hope that it’s possible to achieve a change and to pursue a genuine peace. This is something Israel is always ready for. I’m always ready for genuine peace,” he added.He spoke just one day after Trump met with Abbas in the White House.Abbas spoke on Thursday of his appreciation for Trump and “stressed the need for all parties to refrain from any steps that may preempt or pre-judge issues reserved for permanent status negotiations, including Jerusalem, settlements and refugees,” according to WAFA, the Palestinian News Agency.According to a statement from the White House, peace between Israel and the Palestinians is not the only topic on Trump’s agenda for the region.He will also discuss “the need to counter the threats posed by Iran and its proxies, and by ISIS and other terrorist groups,” the statement said.Netanyahu spoke of the importance of both topics at the Menachem Begin Center in Jerusalem on Thursday night.“When it comes to Israel’s security – there are no compromises, and against the danger of radical Islam we are honing our defensive and offensive capabilities and thereby ensuring our existence,” he said.“We will not allow Iran to acquire nuclear weapons; this agreement [Tehran reached with world powers in July 2015] does not bind us. Whoever attacks us or tries to attack us, we will retaliate,” he added.“There will be no ‘trickle [of nonconventional weapons development],’ no agreement and no restraint. Whoever threatens our existence will find their existence in danger,” Netanyahu said.