Group of MKs petition against peace push based on Saudi initiative 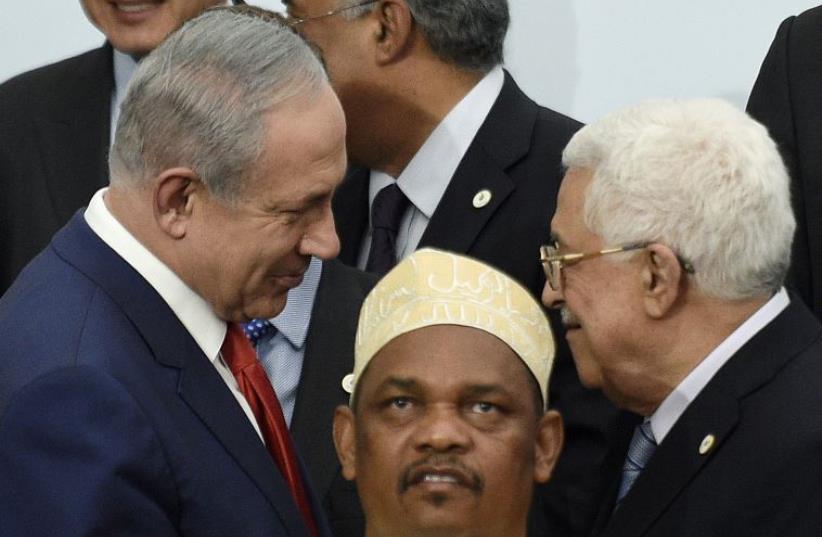 PM Netanyahu talks with President Abbas during a family photo for the opening day of the World Climate Change Conference 2015
(photo credit: REUTERS)
Advertisement
Peace and economic ties with Arab States would be a positive development, but not if they depend on major concessions, a petition signed by 22 MKs Thursday reads.The petition, initiated by the Knesset Land of Israel Caucus, expressed opposition to the Arab Peace Initiative. Among those who signed were Deputy Defense Minister Eli Ben-Dahan and Deputy Foreign Minister Tzipi Hotovely, as well as three other deputy ministers and coalition chairman David Bitan (Likud). The MKs who signed the petition are all from Bayit Yehudi and Likud, except for Eli Cohen of Kulanu. In recent weeks, Prime Minister Benjamin Netanyahu said he could support some elements of the plan, which is also known as the Saudi Initiative, but on Monday said in a closed cabinet meeting that the plan must be revised and he would not accept it if it was a "take it or leave it" situation.Still, caucus members, led by MKs Bezalel Smotrich (Bayit Yehudi) and Yoav Kisch (Likud), signed the petition stating that they are "in favor of peace and economic ties with Arab states, but at the same time firmly oppose the principles included in the Arab Peace Initiative: The establishment of a Palestinian state, dividing Jerusalem, evacuating the Golan Heights, evicting hundreds of thousands of Jews from their homes and allowing refugees into Israel."The petition states that the conditions of the Arab Peace Initiative would not actually lead to peace, justice or security and goes against the MKs' values and policies."We, as representatives of the public, are committed to working against the promotion of this initiative and any similar process," the petition reads.Smotrich and Kisch expressed concern at the traction the Arab Peace Initiative has gained in the press recently, saying that is why they launched the petition."The broad and fast response of MKs to our petition, and their agreement that the initiative is against peace, justice and security, reflects the opinion of most ministers in the government and clarifies that this initiative or anything like it has no chance in this coalition," Kisch and Smotrich said in a joint statement.