Leah and Simcha Goldin were accompanied by Ambassador to the United Nations Danny Danon at the UN headquarters in New York. 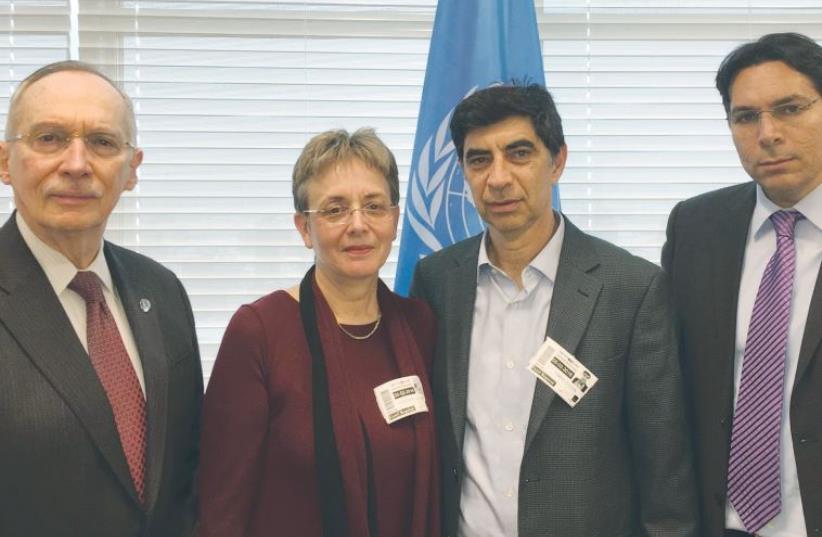 LEAH AND SIMCHA GOLDIN meet with US Assistant Secretary-General for Peacekeeping Operations Edmond Mulet and UN Ambassador Danny Danon
(photo credit: Courtesy)
Advertisement
NEW YORK – The parents of Lt. Hadar Goldin - who was killed during Operation Protective Edge in 2014, and whose body remains in Hamas hands in Gaza - met this Friday with Chef de Cabinet for Secretary-General Ban Ki-Moon, Edmond Mulet, in order to urge the UN to act for the return of the body of their son, as well as that of St.-Sgt. Oron Shaul, for burial in Israel.Leah and Simcha Goldin were accompanied by Ambassador to the United Nations Danny Danon at the UN headquarters in New York.Danon said, “Hadar Goldin was killed during a cease-fire mediated by the international community, and the UN must take responsibility, and act against Hamas to return the bodies of Hadar and Oron to Israel for burial as soon as possible.”Hadar’s mother told The Jerusalem Post, “It was very moving for me to have for the first time Ambassador Danny Danon, and his team from the Foreign Ministry, accompany us.”She continued, “Representatives of the State of Israel officially stood with us, which didn’t really happen until now.”After the meeting with Mulet, she said she felt hopeful. “Before we even started speaking he just identified with our emotions, with the fact that from a humanitarian standpoint, we must bring Hadar and Oron back,” Leah Goldin explained. “Especially that what happened to Hadar happened during a cease-fire that was brokered by the UN secretary-general and the US Secretary of State John Kerry.”She told the Post, “Hadar is actually a victim of an international cease-fire, rather than a victim of a war.”Goldin also addressed the recent statements by UN Secretary-General Ban Ki-moon, in which he said that it is “human nature” for Palestinians to react to occupation, which “often serves as a potent incubator of hate and extremism.”“It angers me, like most Israelis,” she told the Post. “This double standard is horrible, and even though we are [coming to the UN] to bring Hadar back, I feel a little bit like an ambassador of my country’s values.”Goldin said Mulet made it clear that the UN is willing to do whatever it can to help bring her son’s and Shaul’s bodies back to Israel. Goldin and her husband asked Danon to make sure that the UN puts out an official statement on the issue, in order to raise public awareness about their battle.