Hamas builds replica of IDF tank commemorating last year's Israel-Gaza conflict
Advertisement
Hamas announced on Wednesday the operational status of two new missile systems to be included in the Palestinian group's arsenal. In a statement marking the year anniversary of last summer's war in Gaza, Hamas said it has put into service the 'al-Attar A' and the 'Abu Shamala' missiles, named after Hamas commanders Raed al-Attar and Mohammed Abu Shamala, who were killed last August in Operation Protective Edge. "Time will prove their effectiveness," said Hamas spokesman Abu Oveida of the alleged new projectiles. 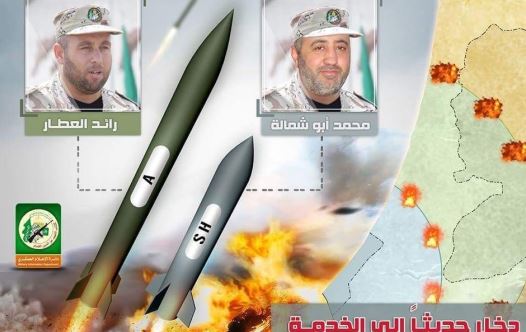 Hamas reveals new missile systems
He added that the war against Israel was "still ongoing," noting that the issue of releasing Palestinian prisoners from Israeli jails was of priority for Hamas. The Hamas spokesman said the latest conflict in Gaza constituted "a strategic transformation for our people's jihad, and reinstated the hope for returning to our homeland."In addition to the new missile systems, the terrorist organization published a picture of a replica IDF tank, mounted with a large fist grasping dog-tags. The tags are etched with the serial number of the missing soldier Oron Saul along with question marks, implying the terrorist organization may have more soldiers in captivity.