The perpetrator was celebrated as a “martyr” by Hamas, who called his actions “heroic.” 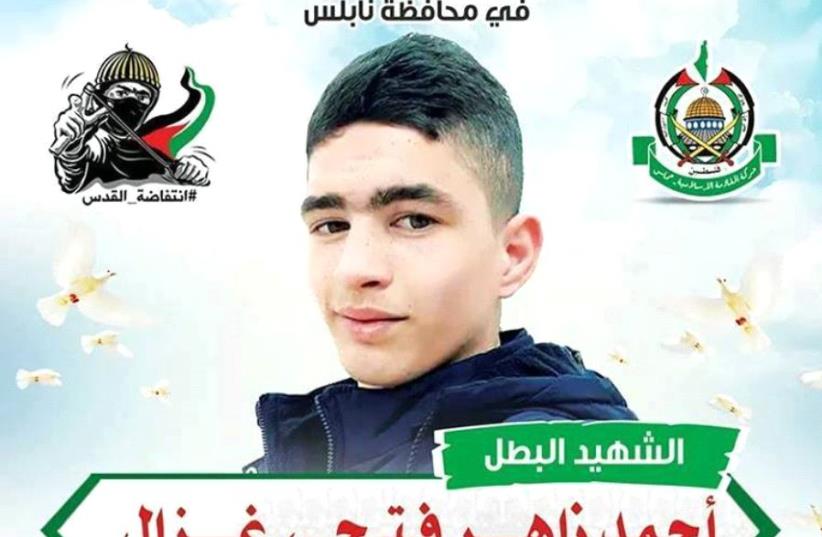 Hamas hailed Ahmed Ghazal as a hero.
(photo credit: ARAB MEDIA)
Advertisement
IDF forces carried out an overnight raid at the West Bank home of the Palestinian teenage attacker Ahmed Ghazal, who stabbed three Israelis in Jerusalem’s Old City on Saturday, the army said in a statement.Ghazal, from the West Bank village of Sebastia, had stabbed two Israeli youth before running into a residential building to hide. He then stabbed a Border Police officer before being shot dead. All victims suffered light-to-moderate wounds, and the two civilians were released from the hospital late Saturday night.Ghazal, who posted pictures of himself visiting the Dome of the Rock moments before the attack, was celebrated as a “martyr” by Hamas-affiliated social media accounts shortly after his death, calling his actions “heroic.”

17yr old Ahmad Ghazal from #WestBank had visited the Dome of the Rock before carrying out stabbing attack in #Jerusalem's Old City pic.twitter.com/uiroq14rDx

Since the beginning of the latest wave of violence to hit Israel and the West Bank in October 2015, numerous attacks by Hamas supporters and members have been thwarted in the West Bank and Jerusalem.  Hamas on Saturday threatened to take "intensive action against Israeli agents in the coming hours and days" in retaliation for the assassination of Mazen Fukaha two weeks ago. The announcement came as Hamas investigates Fukaha’s killing, whose death has been attributed to Israel by the group.Security forces have stepped up their preparedness ahead of the Passover holidays, deploying extra forces to areas such as Jerusalem’s Old City, as there is often an uptick in tensions and violence during major Jewish holidays.
IDF seals Nablus bookstore used as terror infrastructure by Hamas‏ (credit: IDF Spokesperson Unit)
Last week, Shin Bet Director Nadav Argaman warned the Knesset's Foreign Affairs and Defense Committee that the current calm in violence is "deceiving" and that Hamas and other organized terror cells will try to carry out attacks over the Passover holiday.“The relative calm that we are experiencing at this time is quite deceiving, it’s misleading and deluding because Hamas and global jihadi infrastructure are working every day in attempting to conduct terrorist attacks in Israeli territory,” he said, adding that “our goal is to ensure that the holidays are as quiet as possible.”Over the month of March, several Hamas cells planning or responsible for extensive terror activity in the region have been broken up by Israeli security forces who have carried out near nightly raids in an effort to bring down the number of attacks.IDF forces also sealed a bookstore in the West Bank city of Nablus overnight Sunday that had been used by a Hamas terror cell to manufacture explosives and “inciting materials.”Last December, the 20-man Hamas cell was discovered in a state of “high readiness to carry out deadly suicide attacks,” in Jerusalem and Haifa, the Shin Bet said in a statement at the time. Many of their members were arrested.Five Palestinians suspected of throwing rocks or taking part in violent protests were also arrested by IDF troops overnight on Saturday across the West Bank.