Hamas has now allegedly offered clemency to any Gazan informants for Israel, who are willing to turn themselves in within the coming week. 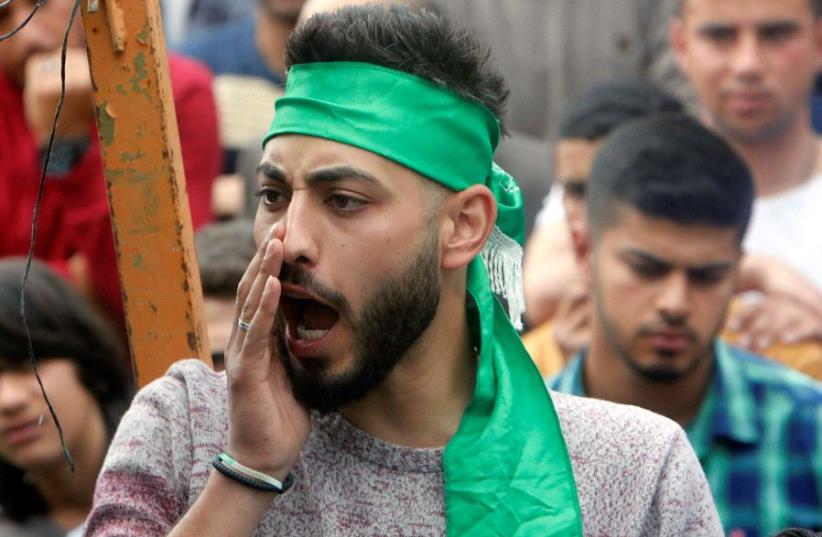 A Hamas supporter shouts anti-Israel slogans in front of the family house of Palestinian senior Hamas militant Mazen Fuqaha in the West Bank town of Tubas, near Jenin, March 25, 2017.
(photo credit: REUTERS)
Advertisement
Hamas on Tuesday called on alleged Palestinian collaborators with Israel to come forward with information on the recent assassination of one of the terrorist organization's top officials in Gaza.Israel has not commented outright on the March 25 assassination of senior Hamas operative Mazen Fuqaha, which Hamas has attributed to Israel and Palestinian collaborators. Israeli officials have indicated, however, that the assassination was carried out as an internal Hamas killing.
Hundreds participate in symbolic funeral for senior Hamas militant Fuqaha (credit: REUTERS)
An Israeli court sentenced Fuqaha to life plus 50 years in prison for planning a suicide bombing on a bus at the Meron junction near Safed in August 2002 that killed nine people and wounded 38 others. Nonetheless, Israel released Fuqaha in 2011 as a part of the Gilad Schalit prisoner swap, but barred him from returning to the West Bank.Since his release, Fuqaha relocated to the Gaza Strip, where he continued to fill a key role in Hamas's Kassam Brigades.Hamas has now allegedly offered clemency to any Gazan informants for Israel, who are willing to turn themselves in within the coming week.In its call, the terrorist organization claimed that any double agents who came forward to disclose information would remain unharmed.Hamas's interior ministry spokesperson Iyad Al-Busm wrote in an official letter that the ministry "was presenting the opportunity to repent, for anyone who fell prey to the occupation's intelligence forces, from midnight on Tuesday and until midnight next Tuesday."The message added that "agents must come to the nearest person whom he trusts who is in touch with Hamas intelligence forces in order to turn himself in.""We promise him full physical and legal protection, as well as a discreet undertaking of the matter."

Adam Rasgon contributed to this report.
Advertisement
Subscribe for our daily newsletter