Israeli and Palestinian Authority security forces are on high alert in Jerusalem and the West Bank as Hamas calls for "day of rage." 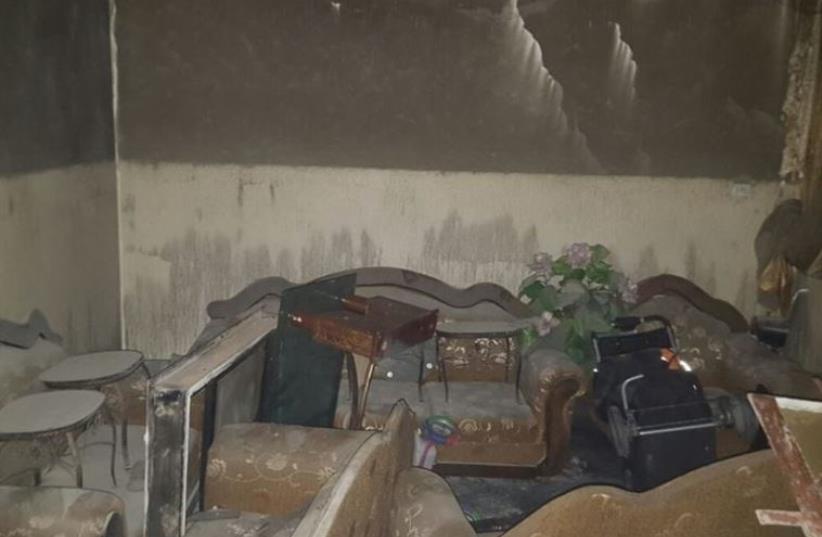 The burnt remains of the Dawabsha family home in Duma where a fire engulfed the house after a molotov cocktail was thrown at it
(photo credit: ZAKARIYA SADDEH/RABBIS FOR HUMAN RIGHTS)
Advertisement
Hamas said Friday that every Israeli is now a legitimate target following the deadly terror attack in the village of Duma in which a Palestinian toddler was killed, Israel Radio reported. In an official message to the public, Hamas also called for a "day of rage" to protest the deadly terror attack and "in order to protect al-Aksa mosque." Palestinian toddler Ali Dawabsha was killed and three members of his family injured after a molotov cocktail was thrown at their home by suspected far-right extremists, in the village of Duma, in the northern area of the West Bank, outside the city of Nablus.Israeli and Palestinian security forces in Jerusalem and the West Bank were placed on high alert following the attack.
Terror attack in Duma
Increased IDF forces were called into the area to help maintain security on the main roads throughout the West Bank to prevent any attempts to attack Israeli vehicles in retaliation.A Palestinian security source told Israel Radio that Palestinian Authority police will be placed outside mosques in the area to maintain order, but added that there will be no way to prevent Hamas protests from taking place. Netanyahu forcefully condemned the terror attack, saying he was shocked by the “horrible” act, and calling it a “terror attack in every way.”“Israel acts with a strong hand against terror, and it does not matter who are its perpetrators,” he said in a statement.The prime minister said he directed the security services to use all means at their disposal to apprehend those responsible and bring them to justice.“The government of Israel is united in its opposition to terrible and heinous acts such as these,” he said, adding that – speaking for the entire country – he wanted to send his condolences to the family of the baby killed in the attack and wishes for a speedy recovery to those injured.Defense Minister Moshe Ya'alon referred to the incident and the death of baby Ali Dawabsha as "a most severe terrorist act that we cannot tolerate, and we condemn in every way."He noted that all security forces including the Shin Bet (Israel Security Agency), the IDF and police are carrying out a "supreme effort" to find those responsible, saying "we will pursue them until we get our hands on them.""We will not allow Jewish terrorists to harm the lives of Palestinians across Judea and Samaria. We will fight them in every way, with every tool at our disposal."He sent out his condolences to the Dawabsha family and requested restraint from the public "to allowing security forces to carry out their mission of capturing the murderers."