“The normalization of relations between Turkey and Israel will not change Ankara’s position towards Hamas,” says senior Hamas official. 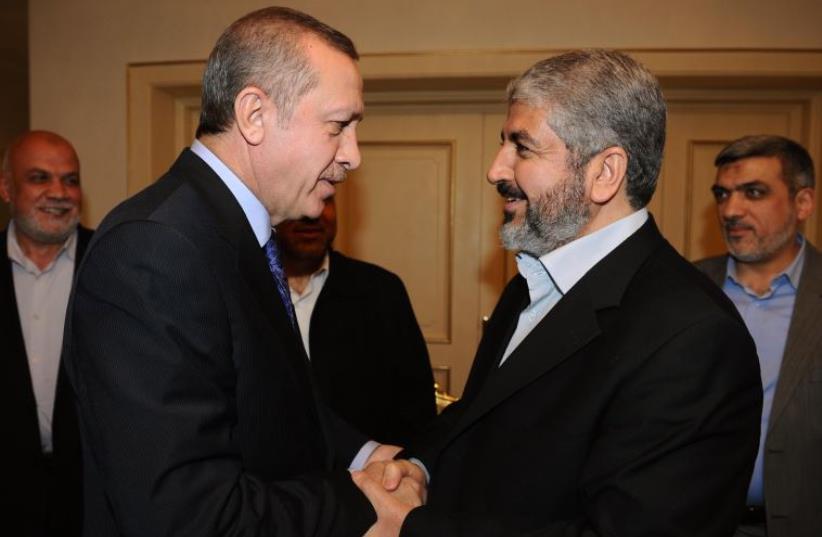 Turkey's Recep Tayyip Erdogan shakes hands with Hamas leader Khaled Mashaal [File]
(photo credit: YASIN BULBUL / TURKISH PRIME MINISTER OFFICE / AFP)
Advertisement
Hamas is closely following reports about rapprochement between Turkey and Israel and is waiting for official word from Ankara on the issue.On Saturday, Hamas leader Khaled Mashaal met in Istanbul with Turkish President Recep Tayyip Erdogan, the first meeting between the two since reports surfaced about an agreement between Turkey and Israel to restore diplomatic ties.The Turkish news agency Anadolu said Mashaal briefed Erdogan on the latest political developments in the region during the 60-minute meeting.The agency did not say whether the two also discussed the reconciliation between Turkey and Israel.In an interview over the weekend, Mahmoud Zahar, a member of the Hamas leadership, refused to comment on the reports, including the possibility that Turkey was planning to impose restrictions on Hamas activities in the country.“The picture remains unclear,” Zahar said. “We will announce our position once we see an official Turkish announcement.”Zahar claimed the reports thus far are unverified and emanated from anonymous sources.“Therefore, we can’t address these reports,” he explained.The Hamas leader said Israel and Turkey have maintained ties for a long time, and they were never cut off in spite of the tensions between the two countries in recent years.Turkey, which has maintained close relations with Hamas over the past few years, plays host to some top Hamas operatives, including Salah Al-Arouri, one of the founders of the movement’s armed wing, Izzadin Kassam.Another senior Hamas official, Ahmed Yusef, predicted that the rapprochement between Israel and Turkey would not have a negative impact on his movement.“Policies among countries are based on interests,” Yusef said. “The normalization of relations between Turkey and Israel will not change Ankara’s position toward Hamas.”The Hamas-affiliated website Al-Resalah quoted Turkish officials as saying their country would not abandon its demand to lift the blockade on the Gaza Strip despite the reconciliation with Israel.The officials claimed Turkey was conditioning its renewed ties with Israel on two conditions: lifting the blockade on the Gaza Strip and payment of compensation for the families of the Turkish nationals who were killed aboard the flotilla aid ship, Mavi Marmara.