Wasfi Qabaha said the suspects threw petrol-bombs from a moving vehicle, setting his car ablaze in front of his home in the al-Basatin neighborhood of Jenin. 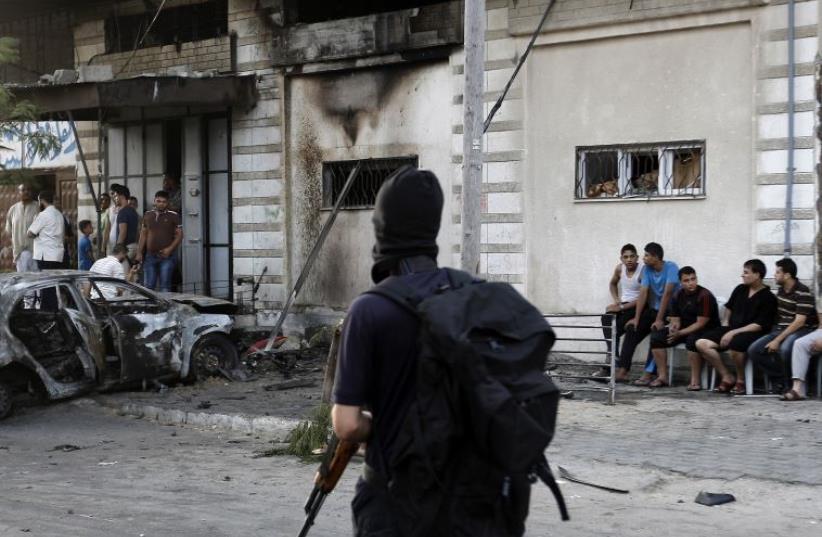 Palestinians gather around a burnt-out car in Gaza City on July 19, 2015, after explosions destroyed five cars in Gaza belonging to members of Hamas and Islamic Jihad, witnesses and a security source said, amid tensions between the Palestinian territory's rulers and Islamist extremists.
(photo credit: MOHAMMED ABED / AFP)
Advertisement
Amid rising tensions between the Fatah-led Palestinian Authority and Hamas, overnight on Friday unidentified attackers fire-bombed the private vehicle of a senior Hamas official in the Palestinian city of Jenin.According to Maan news, Wasfi Qabaha, a former Palestinian prisoner's affairs minister, said that the suspects threw petrol-bombs from a moving vehicle, setting his car ablaze in front of his home in the al-Basatin neighborhood of Jenin. Qabaha took to Facebook, claiming that the attack was the 38th time such attacks targeted him. “Collaborators with the [Israeli] occupation hurled a Molotov bomb at my Hundai Accent 2007 which was parked in front of my house in Baghdad Street in al-Basatin neighborhood," Qabaha said in his social media statement.Hamas was quick to point the finger at rival faction Fatah, led by Palestinian Authority President Mahmoud Abbas, whose crackdown on Hamas in July resulted in the arrest of some 245 of the group's members and sympathizers.Hamas, which rules Gaza but maintains a presence in the Fatah controlled West Bank, has also been the subject of similar attacks in the coastal enclave, where elements allied to the Islamic State have become more bold in their actions against it. In late July, seven private vehicles belonging to Hamas and Islamic Jihad were destroyed in the Sheikh Radwan neighborhood in Gaza. Islamic State graffiti was found near the site of the attacks. In May, Hamas arrested dozens of suspected Islamic State sympathizers and demolished a mosque in Gaza's Deir el-Balah area that it says was a popular among Islamic State supporters.