The last of the five Hamas members, who held Schalit in Gaza after his abduction, allegedly died this week in a tunnel collapse along the Egypt border. 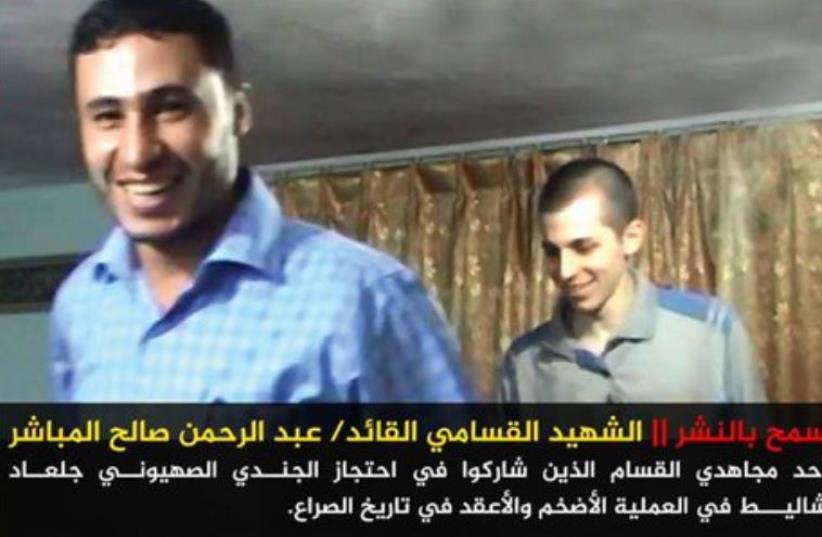 Hamas photo of Gilad Schalit with one of his captors, Abdel Rahman al-Mubasher, who died in a tunnel collapse.
(photo credit: ARAB MEDIA)
Advertisement
Hamas on Wednesday released new photos and details concerning the abduction of IDF soldier Gilad Schalit.According to the information released by the armed wing of Hamas, Izzadin Kassam, all five members of Hamas who were holding Schalit in the Gaza Strip after his abduction have died.Hamas named the five men as Sami al-Hamaydi, Abdullah Ali Labad, Khaled Abu Bakra, Muhammad Rashid Daoud and Abdel Rahman al-Mubasher. It said that all five were responsible for Schalit during his five-year incarceration in the Gaza Strip.Hamas described the five men as “martyrs.” It said that Mubasher was the last to die, in a collapse of a smuggling tunnel along the border with Egypt earlier this week. Hamas did not say how the remaining four died. However, sources in the Gaza Strip said the four were killed by the IDF over the past few years.Hamas also released an undated photo of Mubasher together with Schalit.Hamas said that the decision to reveal the identities of Schalit’s captors was taken by Muhammad Deif, the overall commander of Izzadin Kassam in the Gaza Strip.