Turkey denies that it has dropped the demand that Israel lift the blockade of Gaza. 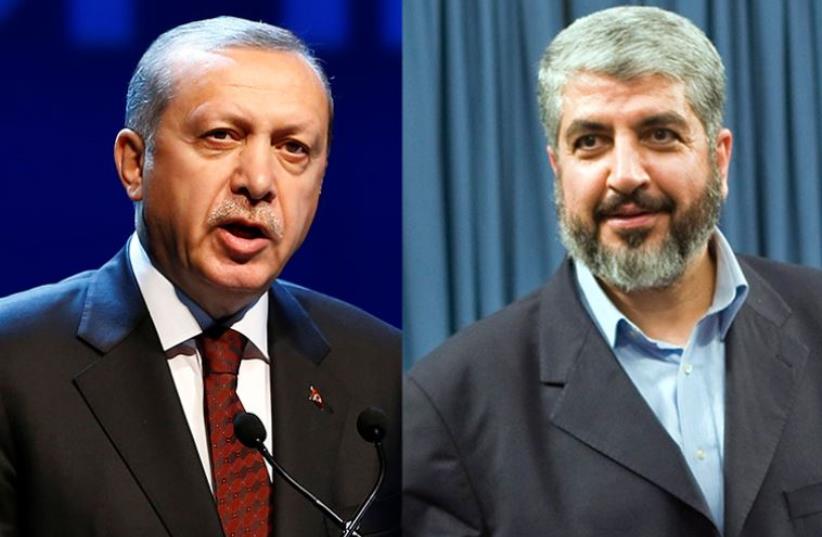 Erdogan and Mashaal
(photo credit: REUTERS)
Advertisement
Amid reports about an approaching normalization deal between Israel and Turkey, Hamas claims that Turkey has renounced the condition that Israel lift the siege on Gaza that it has defined as a prerequisite for reconciliation.In a conversation with the daily-Arab London-based newspaper Rai al-Youm, unnamed Hamas officials said: "Turkey's President Recep Tayyip Erdogan announced to Hamas's leadership that he has done everything possible to lift the siege or ameliorate it, but the Israeli government stubbornly rejected his attempts.""Erdogan told the leadership that he must make progress on the normalization deal with Israel in order to serve Turkey's interests," the officials in Hamas added.These officials said that they expect Turkey to take strong measures against senior Hamas officials residing in Turkey, mainly by limiting their freedom of movement within the state, to meet Israel's condition for normalization. In a press conference on Tuesday, Turkey's Foreign Minister Mevlut Cavusoglu said that his country will never give up on the condition that Israel lift the siege on Gaza., adding that Turkey's relations with Hamas are "not subject to any discussion" and that it will continue its relations with the Palestinian terror organization.Lately, senior Hamas leaders have halted their visits to Turkey. Hamas's political bureau chief, Khaled Mashaal, neither attended the annual conference of Turkey's ruling party, the AKP, that took place in Ankara in May, nor participated in Erdogan's daughter's wedding. Yaakov Nagel, acting head of Israel's National Security Council, said on Tuesday that Israel and Turkey are "very close" to a rapprochement agreement, echoing equally upbeat assessments coming out of Ankara.Nagel’s comments in an Israel Radio interview come just before Israeli and Turkish teams are scheduled to meet on Sunday in an undisclosed European location, to put final touches on an accord that has been in the works for months to reestablish relations.The Israeli team will be headed by Prime Minister Benjamin Netanyahu’s special envoy, Joseph Ciechanover, and the Turkish delegation will be led Turkish Foreign Ministry Undersecretary Feridun Sinirlioglu, a former ambassador to Israel. Herb Keinon contributed to this report.