A Hamas spokesperson said that the organization plans to barter with Israel by using the remains of IDF soldiers that the group is believed to possess following last year's Operation Protective Edge. 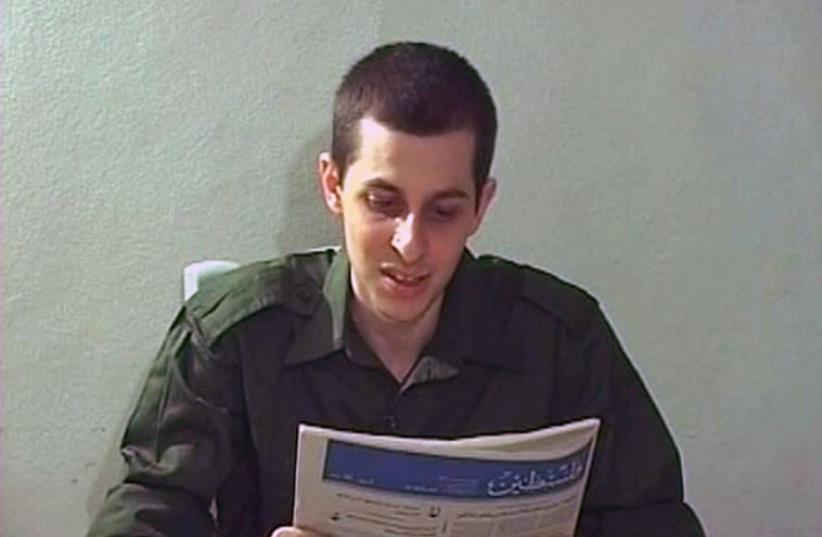 Israeli soldier Gilad Schalit is seen in this video grab released on October 2, 2009 while he was in Hamas captivity
(photo credit: REUTERS)
Advertisement
The military wing of the Palestinian Islamist group Hamas vowed Friday that it will secure the release of more prisoners held in Israeli jails by means of another swap similar to the 2011 exchange involving captive IDF soldier Gilad Schalit.During a public demonstration in the Gaza City quarter of Shejaia, a Hamas spokesperson said that the organization plans to barter with Israel by using the remains of IDF soldiers that the group is believed to possess following last year's Operation Protective Edge."Rest assured," the spokesperson said, aiming his remarks at Palestinian prisoners. "The ones that are coming for you are heroes. They are following the same path, so your liberation is soon coming, with the help of god."Hamas held Schalit for five years in captivity, releasing him after reaching agreement with Israel on the release of hundreds of Palestinians who were incarcerated for various terrorist-related offenses. Earlier this week, the parents of Golani Brigade soldier St.-Sgt. Oron Shaul, 22, killed in action in the Gaza Strip in 2014, held a press conference Sunday in their hometown of Poriya and demanded the government do more to recover their son’s remains.“The current situation has to change. This requires us to change our strategy. We have no doubt that we must think differently in order to bring Oron and Hadar [Goldin] home,” Shaul’s mother, Zehava, said.The body of Lt. Hadar Goldin, 23, from the Givati Brigade’s Reconnaissance Company, has also not been recovered. He was killed in a Hamas tunnel in Rafah during Operation Protective Edge, and Shaul was killed in an ambush in Gaza City’s Shejaia neighborhood.“Despite the efforts that have been made or not made, we have not seen a change in the situation and Oron has not been returned home. Mr. Prime Minister, a year and a half and the situation remains the same,” she said, addressing Prime Minister Benjamin Netanyahu.In an unusual step, she also turned directly to Hamas leader Ismail Haniyeh.“I am turning to you again, for a second time. I want to believe you. Present me with concrete evidence on the condition of Oron. We will turn over the country, and the world, to ensure that the deal [for his return] will be carried out.”Even though their bodies have not been found, the IDF Rabbinate classified both men as soldiers who died, but whose place of burial is not known. Hamas in 2014 immediately claimed to have kidnapped Oron Shaul, something later disputed by the IDF.Zehava Shaul told reporters she was “demanding from her country” that it quickly bring back her son, together with Goldin.This past summer, Israel had begun backchannel negotiations to return the bodies of Shaul and Goldin, according to Hamas officials.A Hamas source claimed that a European mediator contacted Hamas and inquired about the status of the bodies of the two soldiers.The source added that Hamas refuses to discuss this issue until Israel releases all the detainees who were traded for tank gunner Gilad Schalit and were rearrested last summer after Hamas terrorists abducted and murdered three Israeli teenagers in Gush Etzion.The Prime Minister’s Office had no response on the issue.Yesh Atid MK Haim Jelin issued a statement saying that the government was doing everything it could to keep the Shaul and Goldin families quiet.“The government claims that every word will increase the price for the return of the boys, but silence makes us forget the issue,” he said.Herb Keinon contributed to this report.