A senior diplomatic source said that Prime Minister Benjamin Netanyahu will announce the agreement, and explain its elements, at a press conference at noon in Rome. 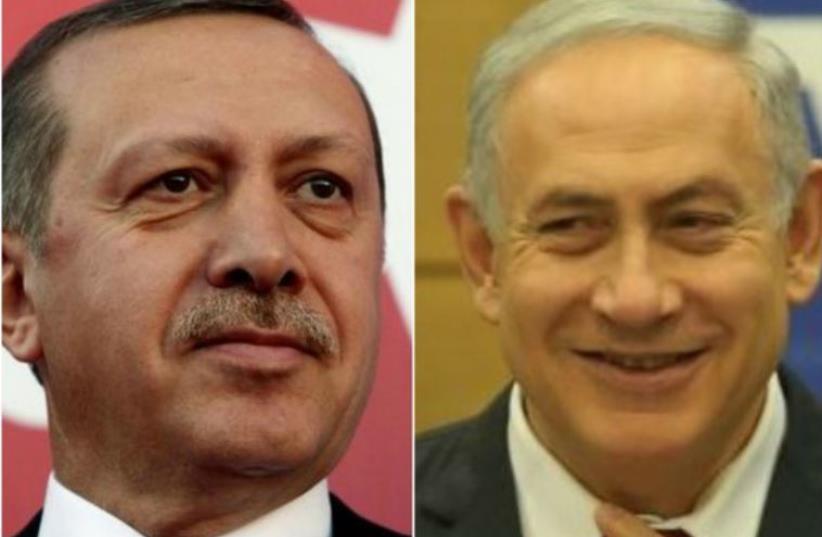 Erdogan and Netanyahu
(photo credit: REUTERS)
Advertisement
Israel and Turkey are set to announce on Monday that they have reached a rapprochement agreement that will normalize relations between the two countries more than six years after ties between the erstwhile allies fell apart following the Mavi Marmara incident.A senior diplomatic source said Prime Minister Benjamin Netanyahu will announce the agreement, and explain its elements, at a news conference at noon in Rome. The Turks will simultaneously hold a similar event in Ankara. Netanyahu arrived in Rome on Sunday for talks with US Secretary of State John Kerry.Foreign Minister director- general Dore Gold and his Turkish counterpart, Foreign Ministry Undersecretary Feridun Sinirlioglu, are then scheduled to separately sign the agreement in their respective capitals on Tuesday.On Wednesday, the agreement will come for the approval of the security cabinet and, if all goes according to plan, ambassadors are expected to be reappointed by the end of July.Monday’s news conference comes after Israeli and Turkish teams finalized the deal in one last round of talks Sunday in the Italian capital. The Israeli team was led by Netanyahu’s special envoy, Joseph Ciechanover, while Sinirlioglu – a former ambassador to Israel – led the Turkish team.According to the senior Israeli source, the Turks have given Israel a letter pledging that Turkish President Recep Tayyip Erdogan will direct the relevant Turkish authorities to work on a humanitarian basis for the return to Israel of two missing Israelis in Gaza – Avraham “Abera” Mengistu and a Beduin from the South – as well as the bodies of St.-Sgt. Oron Shaul and Lt. Hadar Goldin, the two soldiers killed during Operation Protective Edge in 2014.According to the source, Israel has been negotiating over the letter for a while, but Netanyahu only updated the parents about it Sunday night to prevent any leaks of the document beforehand.The accord Netanyahu will describe on Monday includes the following elements:• Turkey will be allowed to transfer humanitarian aid to the Gaza Strip without limitation through the Ashdod port, and will be allowed to build, inside Gaza, power and desalination plants and a hospital. This is in lieu of a lifting of the blockade of Gaza, which Erdogan had demanded for years as a precondition for normalizing ties.• Turkey will not allow Hamas to plan or carry out attacks against Israel from its territory. Turkey did not, as Israel demanded, agree to kick the terrorist organization out of the country. Erdogan, according to the Turkish press, met Hamas leader Khaled Mashaal in Istanbul on Friday to update him on the deal.• As a humanitarian act, Israel will pay $20 million to a special fund set up for the families of the nine victims killed on the Mavi Marmara by IDF commandos who faced violent resistance when they boarded the ship to keep it from breaking the naval blockade of Gaza.The diplomatic source stressed that this payment was being made on a humanitarian basis, is external to the agreement and is not an Israeli acknowledgment of responsibility.The money will only be transferred after the Turkish parliament passes a law making it impossible for further Mavi Marmara claims to be made against Israeli officers or soldiers in the country.Turkey also committed itself to compensate Israel if claims related to the ship are made against Israel in third countries.The source said the monetary compensation was decided upon some three years ago.Bloomberg reported that energy talks between the two countries are expected to open immediately after the reconciliation is announced, and that this could pave the way for multi-billion dollar natural gas contracts and the export of natural gas to Turkey, which is looking to reduce its energy dependence on Russia.The deal faced criticism from politicians in Israel on the Right and Left. Former minister Gideon Saar, who was Netanyahu’s No. 2 in Likud, blasted it in a post on Twitter.“Israel will pay Turkey reparations for the Marmara?” he asked.“I hope the reports are untrue. If they are true, this would be national humiliation and an invitation for further flotillas and libels by haters of Israel.”Government sources dismissed Saar’s criticism, however, pointing out that he was in the government when the compensation issue was agreed upon.Zionist Union MK Erel Margalit, meanwhile, said the proposed deal would be a “mark of Cain” on Netanyahu’s head.“Netanyahu once again surrendered to Hamas with his tail between his legs, harmed IDF soldiers and abandoned the families of the soldiers whose bodies have not been returned,” Margalit said.Netanyahu arrived in Rome on Sunday afternoon, and later in the evening met with Kerry, whom he was expected to update on the developments with Turkey.The US, for years, has been urging its two allies in the region to patch up ties.Netanyahu is scheduled to meet again with Kerry on Monday, for talks expected to focus on the Palestinians and the possibility of restarting a diplomatic process.Netanyahu addressed the diplomatic process at Sunday’s cabinet meeting before he flew to Rome, saying Palestinian Authority President Mahmoud Abbas again proved last week “to the entire world that he is not interested in direct negotiations with Israel.Worse, he also spread abhorrent lies about the State of Israel and Judaism.True, he quickly apologized, a halfhearted half-apology, but the things he said there were in keeping with what he has said about us on other occasions, including at the UN General Assembly.Therefore, I think that people can conclude from this who wants to advance peace and a peace process – and who does not.”Netanyahu was referring to Abbas’s charge that some rabbis had called on the government to poison Palestinian wells, as well as his refusal to meet President Reuven Rivlin in Brussels last week.In a related development, UN Secretary-General Ban Ki-moon is scheduled to arrive in Israel on Monday and hold talks with Rivlin. On Tuesday, he is expected to meet Netanyahu in Jerusalem and Abbas in Ramallah.Gil Hoffman contributed to this report.