The attack came as Trump's envoy is in the country trying to push forward the US administration’s diplomatic initiative. 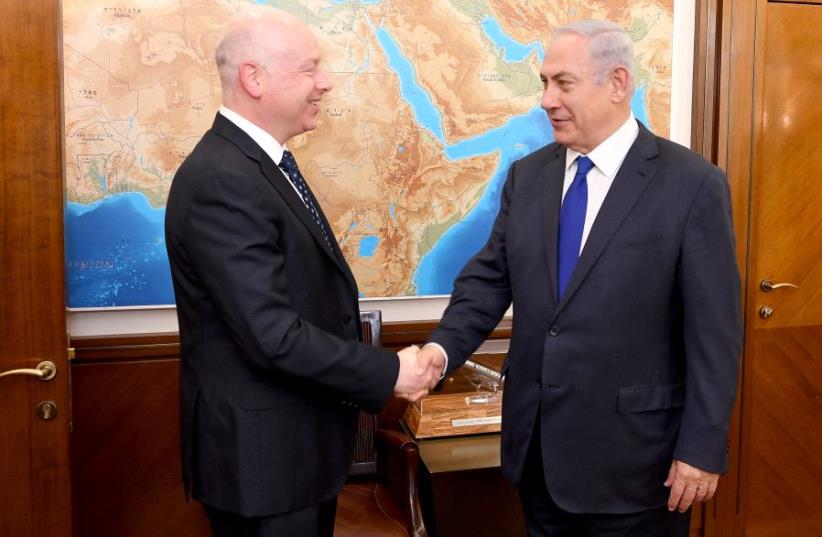 Jason Greenblatt Meets PM Netanyahu
(photo credit: MATTY STERN, US EMBASSY TEL AVIV)
Advertisement
US envoy Jason Greenblatt’s already enormously difficult task of creating an atmosphere conducive to Israeli-Palestinian negotiations just got even more difficult on Tuesday with the terrorist attack in Har Adar that left three Israelis dead.The attack came as Greenblatt is in the country trying to push forward the US administration’s diplomatic initiative, an initiative based not on top-down negotiating breakthroughs, but rather bottom-up improvement of the atmosphere.And the terrorist from Beit Surik, a 37-year old father of four named Nimr al-Jamal, just threw a huge wrench in the works.Greenblatt – who in his nearly eight months in the job and has been extremely tight-lipped about what the administration is trying to do – shined some light on its strategy at a meeting of donor countries to the Palestinian Authority held last week in New York.The US, he said, “is deeply committed to achieving an Israeli-Palestinian peace agreement,” and to this end has held deliberations with Palestinian and Israeli leaders, as well as with other leaders in the region.“It is no secret that our approach to these discussions departs from some of the usual orthodoxy, for after years of well-meaning attempts to negotiate an end to this conflict, we have all learned some valuable lessons,” he said.“Instead of working to impose a solution from the outside, we are giving the parties space to make their own decisions about their future.Instead of laying blame for the conflict at the feet of one party or the other, we are focused on implementing existing agreements and unlocking new areas of cooperation which benefit both Palestinians and Israelis.”A major component of this plan is improving the daily lives of the Palestinians, be it through brokering a deal for water and electricity projects, or plans to develop better roads and new industrial parks.And in these efforts to improve the daily lives of the Palestinians, allowing Palestinians to work inside the Green Line and making passage from the West Bank into pre-1967 Israel easier are key ingredients.And it is precisely those two elements that Jamal's attack will now call into question.Indeed, it has already led to calls to rethink increased work permits and efforts to ease the situation at the checkpoints.Transportation and Intelligence Minister Israel Katz already said in response to the attack that it would have “serious implications,” and that its message to Greenblatt was, “Israel’s security was and remains the supreme consideration in the government’s policy, and is above any other consideration of improving and easing the lives of the Palestinians.”Culture and Sport Minister Miri Regev added that the Palestinians must understand that work permits “are not a license to murder.”The Trump administration is reportedly urging Israel to make some gestures toward the Palestinians to improve the overall atmosphere. Two ideas – building a new industrial park near Tulkarm and improving a road to the new Palestinian city of Rawabi – were discussed, but not approved, at Sunday’s security cabinet meeting.The government’s appetite for making further gestures at this point will be reduced following Tuesday’s attack, which was carried out by someone who benefited from Israel’s policy of trying to ease the situation for Palestinians.And even if Prime Minister Benjamin Netanyahu might still want to show his appreciation to the Trump administration for its Mideast policies by making some gestures the US would like to see, politically he will have to look over his right shoulder and pay attention to what ministers like Katz and Regev are saying.That situation could be altered were Palestinian Authority President Mahmoud Abbas to come out and clearly condemn the attack.But in the midst of trying to reconcile with Hamas in Gaza, and following his words last week to the UN in which he saluted “glorious” Palestinian “martyrs” and “courageous prisoners” sitting in Israeli jails – in other words, Palestinian terrorists – such a condemnation is unlikely.The net result: Jamal’s attack has already set back what Greenblatt came here to do just two days ago.