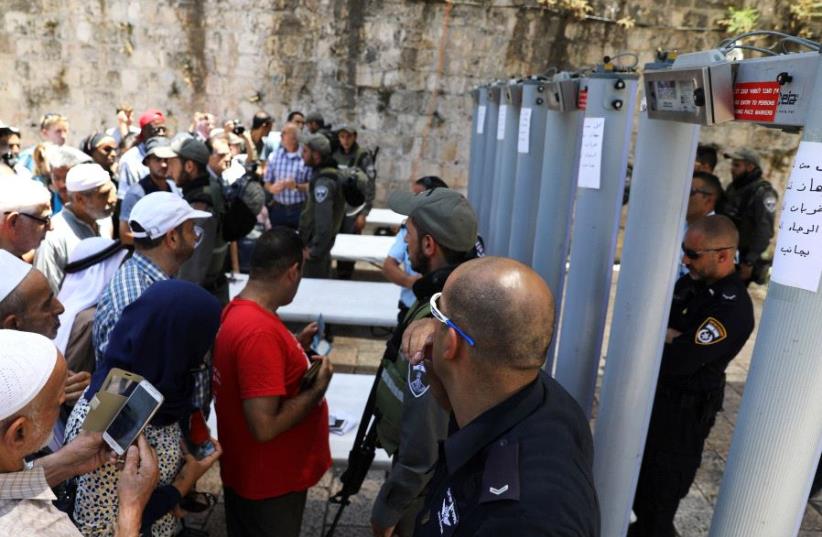 Palestinians stand in front of Israeli police officers and newly installed metal detectors at an entrance to the Temple Mount, in Jerusalem's Old City July 16, 2017.
(photo credit: REUTERS)
Advertisement
The head of the Wakf Muslim religious trust in Jerusalem, Abdul Azim Salhab, saying he was speaking in the name of all Muslims worldwide, on Friday rejected the security cabinet's decision not to remove metal detectors at the entrance to the Temple Mount (al-Aksa mosque) compound.Speaking at a press conference in East Jerusalem, Salhab said: "We are one. We all reject the measures to put in metal detectors. We reject the entrance of settlers to the mosque compound. We in Jerusalem represent 1.7 billion Muslims who say in one voice no to the metal detectors. We say no to the arrangements taken by the Israelis against the Wakf."Israeli police installed the metal detectors after an attack last Friday by three Israeli Arab gunmen at an entrance to the Temple Mount left two policemen dead. The assailants were shot dead by police. While Israeli authorities say the detectors are necessary for security, Palestinian leaders say they are a violation of the status quo and are indicative of an Israeli intention to take over the mosque, the third holiest site in Islam.
Video of Temple Mount terrorist attack (Israeli Police)
The Palestinians have called for a day of rage Friday to protest the installation and security forces are bracing for a possible eruption of violence. The Israeli security cabinet late Thursday decided to retain the detectors and limit entry to the mosque Friday to those fifty years old and younger.Salhab said: "We are the only authority in charge of taking care of the compound and its renovation. We will pray today behind the metal detectors or in any place where the Israeli police stop us. We ask Jordan to use all its cards to pressure Israel to avoid a catastrophe."Meanwhile, Palestinian president Mahmoud Abbas has called a meeting of PLO executive committee members and other leaders for Friday evening, PLO executive committee member Hanan Ashrawi told The Jerusalem Post.She said the security cabinet's decisions were "generating more provocation of religious sentiments.""This mentality of control, exclusion and exclusivity, attempting to change the status quo and impose its own control under the pretext of security on the Islamic holy sites and all of Palestinian Jerusalem is what enflames the situation. They are playing with fire." She saidIn Ashrawi's view Israel is doing now at al-Aksa, what it did in the Cave of the Patriarchs (Ibrahimi Mosque) in Hebron over the years. "It is creating facts, encroaching gradually and taking over.""What Israel is doing is telling the whole world that we do what we want with no consequences. It is actually arrogance that no matter what the world says and law says, we will use power, control and coercion."The predominantly Arab left-wing Hadash party, the largest component of the Joint List in the Knesset, issued a statement condemning the security cabinet's decision, terming the installation of the metal detectors "a blatant provocation harming freedom of religion and an attempt to change the status quo in the holy places as part of the policies of this fundamentalist government led by settler bullies and advocates of annexation and 'the third temple'."It alleged that the government was "pushing towards a religious war" and said it "bears responsibility for the dangerous consequences of this insane policy."MK Zuheir Bahloul (Zionist Union) criticized the security cabinet for upholding the installation of the metal detectors, saying this "is a recipe for confrontation." Installing them was "unilateral and ignores the other side and is therefore wrong and ill-considered," he said.