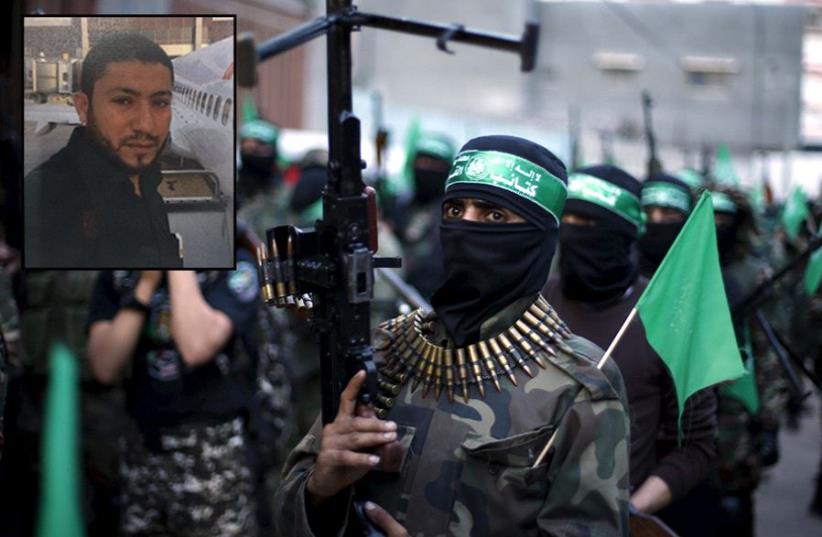 Muhammad Murtaja
(photo credit: SHIN BET,REUTERS)
Advertisement
The state and the Shin Bet (Israel Security Agency) have announced the indictment and arrest of the head of a Turkish humanitarian aid group in Gaza for financing Hamas’s military wing.Gaza resident Muhammad Murtaja, 39, was arrested by the Shin Bet in February while attempting to depart from Israel on a trip related to his position as the Gaza coordinator of the Turkish Cooperation and Development Agency (TIKA).The Southern District Attorney’s Office filed an indictment against Murtaja with the Beersheba District Court this past Thursday, but both the indictment and arrest were only declassified on Tuesday.
Turkey will not drop demand for end to Gaza blockade
Since 2011, Murtaja has also worked with the Turkish organization IHH (Humanitarian Relief Organization), which Israel views as a terrorist organization.Israel has accused the IHH of engineering the 2010 Mavi Marmara flotilla incident, in which 10 Turkish citizens were killed attacking Israeli commandos, which led to a six-year rift between the two countries.After years of failed attempts, the diplomatic conflict was finally resolved with a deal in June 2016, a key part of which was the stipulation that Turkey abrogate any connection with Hamas’s military wing.While questions could be raised about how carefully Turkey has policed this issue, statements by the government and the Shin Bet appear to indicate that Murtaja took advantage of Turkish trust.Investigations revealed that Hamas recruited Murtaja in late 2008, and that his activity with the terrorist group included funneling funds to it that were earmarked for humanitarian projects.According to the Shin Bet, he was also involved in Hamas terrorist training and exercises, manufacturing weapons and explosive devices and digging attack tunnels. Murtaja was said to have stored weapons, such as hand grenades and guns, in his home on behalf of Hamas. A statement from the Government Press Office said, “During the investigation, it became clear that Murtaja’s trip via Israel to receive training from TIKA, which led to his arrest for interrogation, was also intended to allow him to acquire information that would improve the accuracy of Hamas rockets being launched at Israel.“It was further discovered during the investigation that, beginning in 2012, Murtaja served as the Gaza Strip coordinator of TIKA, [an organization that] works on behalf of the Turkish government to advance humanitarian projects in the Gaza Strip. The investigation showed that Murtaja deceived TIKA by misusing the organization’s resources and funds, which were intended for substantial humanitarian projects in the Gaza Strip, by diverting them to Hamas’s military wing. This fraud was carried out in collusion with the senior ranks of Hamas in Gaza, headed by Ismail Haniyeh,” the statement read.The statement also described the techniques that Murtaja used: “He would give his superiors in TIKA a list of impoverished residents in the Gaza Strip who were candidates to receive financial aid.In fact, Hamas senior officials provided these lists to Murtaja, and most of the so-called ‘needy’ people on them were actually terrorists in the Hamas military wing or their family members. In this manner, they received benefits and stipends.”Moreover, he “enabled millions of shekels to be diverted to members of the Hamas military wing during and after Operation Protective Edge. For instance, food aid packages donated by TIKA for the destitute population in the Gaza Strip were given to members of the Hamas military wing. In addition, when Operation Protective Edge ended, the organization financed a public event at which Hamas military members were awarded stipends and benefits,” the statement read.The Shin Bet also uncovered that Murtaja’s activities with “the Turkish IHH helped to directly fund the activities of the Hamas military wing... The investigation uncovered that Mehmet Kaya, the coordinator of IHH’s Gaza office, gave Hamas leaders Ismail Haniyeh and Raad Saad cash from Turkey that was earmarked for the Hamas military wing.“The money transferred by the IHH to the Hamas military wing was used...to build a facility to train Hamas navy commandos, as well as to purchase equipment and weapons. For years, IHH methodically transferred funds this way to the Hamas military wing to be used for its military buildup,” the statement continued.The GPO statement said, “Murtaja provided a great deal of operative information during the investigation, including on tunnel routes, the methods used by Hamas in digging the tunnels, action plans for fighting and weapons manufacturing.”The GPO statement added that the case showed “the considerable efforts invested by Hamas in preparing for a military confrontation with Israel, at the expense of the humanitarian situation in Gaza” as well as “the diverse fraudulent methods used by Hamas vis-à-vis the international community and humanitarian aid organizations. These acts of fraud, involving the highest levels of Hamas leadership, divert money and resources meant to rehabilitate the Gaza Strip and the destitute population therein.”The coordinator of government activities in the territories, Maj.-Gen. Yoav “Poly” Mordechai, responded to the announcement, saying, “The egotistical Hamas terrorist organization has robbed funds that were meant for the needy of Gaza from international organizations.Hamas prospers at the expense of the residents of the Strip and uses donations meant for them to finance terrorism.How long will the world and the Gazan people ignore this?” Hamas spokesman Fawzi Barhoum responded by blasting Israel for what he described as “false accusations” against international aid groups.“The Israeli entity’s continued targeting of international institutions operating in the Gaza Strip, arresting their directors and fabricating accusations against them... comes as a part of a frantic Zionist campaign to tighten the siege on Gaza and its residents,” Barhoum said in a press release posted on Hamas’s official Twitter account.In the past year, Israel has accused a few workers from international humanitarian groups of colluding with Hamas authorities.Barhoum added that Israel is engaged in an effort “to terrorize” international organizations and “prevent them from providing services to the poor, children and owners of destroyed homes in Gaza.”Adam Rasgon and Jerusalem Post staff contributed to this report.