Hebron shooter trial: Who is in charge of bombs in the West Bank – the IDF or police?

IDF lead asked Israel police bomb expert Haim Kapach “do you agree that the army is the sovereign in Judea and Samaria?” Kapach responded “sovereign of what?" 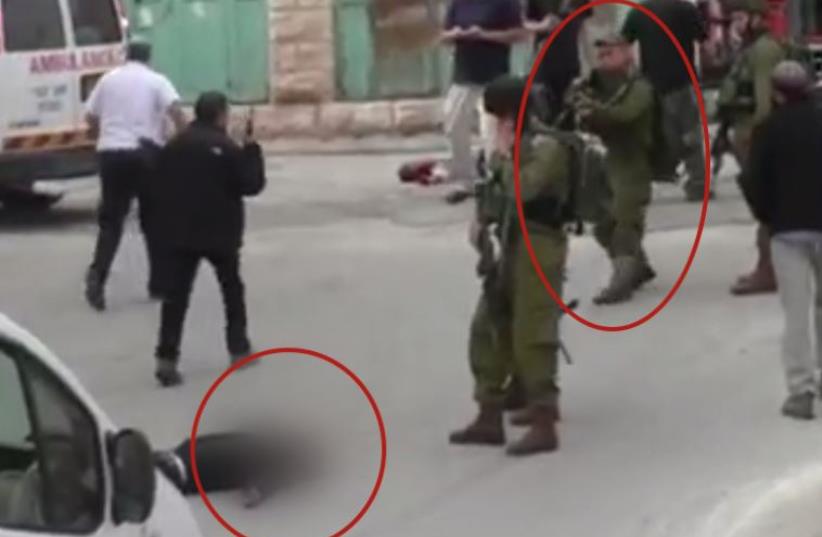 IDF soldier shoots subdued Palestinian
(photo credit: screenshot)
Advertisement
The IDF prosecution and an Israel police bomb expert fought at the Hebron shooter trial on Sunday over which institution is in charge of addressing bomb threats in the West Bank: the IDF or the police.

The issue is important to the fate of Elor Azaria in the trial against him for manslaughter after he shot and killed Abdul Fatah al-Sharif on March 24, after the Palestinian had already been “neutralized” by two soldiers whom he had attacked.

Azaria said he shot Sharif suspecting he was wearing an explosive vest and accused the IDF commanders on the ground of failing to quickly call a bomb squad to check Sharif’s body before moving the body from the scene – a standard police procedure.

In the incident, the IDF said that it overrode police procedure, due to having generally established that Sharif posed no threat and experience that keeping an attack scene open for too long could lead to further attacks.

Throughout the case, IDF and police officials disagreed about whether it was wise or negligent to move Sharif before he was checked by a bomb expert.

Kapach responded “sovereign of what,” leading to some laughter from the press gallery in light of this weekend’s fireworks between Prime Minister Benjamin Netanyahu and the United States over the status of the West Bank.

Weissman narrowed his question to whether Kapach agreed that the army “ruled” the West Bank. Kapach admitted that “the army rules,” but qualified his admission by adding that the bomb squad was still responsible for bomb-related issues.

Eventually, Weissman got Kapach to agree that the IDF Central Commander was the supreme commander of the West Bank, but even then he said that the way things work in the field is that each terror incident scene runs differently and often the IDF defers to the police both on the ground and for setting the intelligence picture.

Kapach said that many of the dynamics and procedures were the same, but explained that the West Bank was overall more dangerous since Palestinian terrorists have easier and more frequent access to such areas than they do to areas within the Green Line.

With Ashkuri, Weissman attacked his written submitted expert report as being identical and copied from other documents used by the defense.

Ashkuri angrily denied the allegation and slammed Weissman and the court for not giving him sufficient respect.

Because Weissman did not ask Ashkuri about the content of his written report, the court did not even allow him to make a general statement about his findings, noting that his report would stand on its own.

Also, on Sunday, one of Azaria’s former non-commissioned junior commanders testified on his behalf that he was a very good soldier who never lost control of his emotions nor did he make comments against Palestinians.

In contrast, the former junior commander criticized the three top commanders in the case, who are all against Azaria, as coming down on him unfairly for making a mistake in a chaotic terror scene where most felt their lives were still in danger.

He confirmed the defense’s allegation that he and other soldiers felt swayed to stand against Azaria due to “the spirit of the commanders” even if on the inside they were upset by how he was treated.

The trial continues on Thursday, likely with the cross-examination of the senior pathologist for the defense, Yehuda His, who filed a report saying that Sharif was dead or dying before Azaria shot him.
Advertisement
Hot Opinion