The four Henkin children – then ages nine, seven, four and ten months – bore witness to the shocking murder of their parents, all from the backseat of the Henkins’ car, said the complaint. 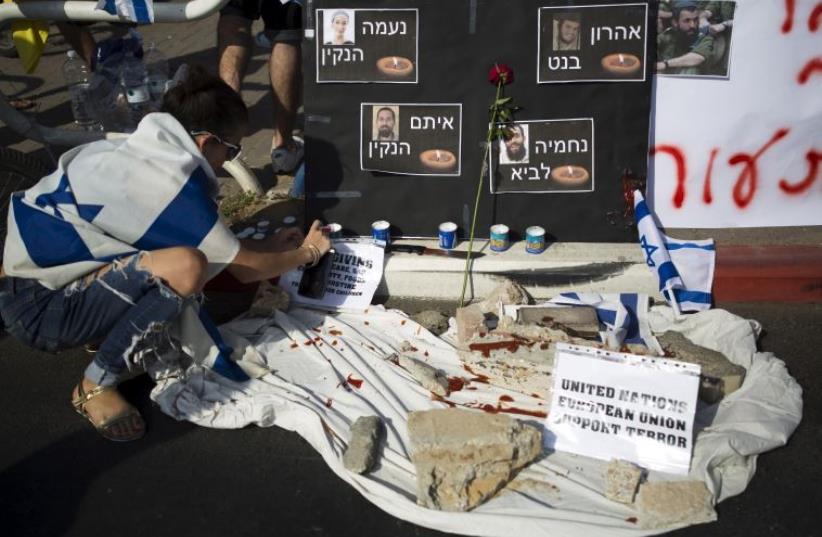 A woman lights a candle in memory of Eitam and Na'ama Henkin who were shot dead on Thursday and Aharon Bennett and Nehemia Lavi who were stabbed to death by a Palestinian man in Jerusalem's Old City on Saturday
(photo credit: REUTERS)
Advertisement
he children of Eitam and Naama Henkin filed a $360 million civil damages wrongful death lawsuit against Iran and Syria on Wednesday for their alleged involvement in the murder of their parents in a West Bank terrorist attack in 2015.The civil case, filed in a federal court in Washington, comes three years after the Palestinian terrorists who murdered the Henkins had been sentenced to life in prison by an Israeli military court in 2016.It also comes just as the US campaign to pressure Iran and its Islamic Revolutionary Guard Corps (IRGC) is heating up. The IRGC is often credited with supporting terrorist groups throughout the region, including Hamas.According to the civil lawsuit, on the evening of October 1, 2015, American-Israeli Eitam Henkin, his wife Naama and their four minor children were driving in the West Bank.At one point, their car was overtaken by another vehicle driven by three Palestinian gunmen.The three men, noted the complaint, have admitted that they were members of Hamas and that they intended to kidnap a Jewish resident of the West Bank. This is a tactic used by terrorists to obtain the release of imprisoned terrorists.However, instead of a kidnapping, one of the terrorists leaned out of the window as they overtook the Henkins’ car and sprayed automatic gunfire at the family, wounding Eitam, who stopped the car.Two of the three terrorists approached the car, according to the legal complaint. The lawsuit said that the terrorists tried to kidnap Eitam, but when he fought back, they shot and killed him with an automatic weapon.Naama also fought back and was killed at point blank range.The four Henkin children – then ages nine, seven, four and ten months – were witness to the horrific murder of their parents, all from the backseat of the family car, said the complaint.After murdering Eitam and Naama, the terrorists abandoned their kidnapping plot and fled the scene.The IDF apprehended the attackers several days later, together with other individuals who helped them plan and execute the attack.The lawsuit then explains the connection between the attackers, Hamas and Iran, multiple Iranian banks and Syria.According to the complaint, Hamas relies on Iran and Syria for material support, including but not limited to training, weapons and financing.It says that Iran provides logistical and military support to Hamas through the IRGC’s Quds Force and other entities, and that Tehran funnels much of its financial sponsorship of Hamas through Bank Markazi, Bank Melli and Bank Saderat.The complaint said that, “but for the support provided by Iran and Syria, Hamas would not have been able to develop into the cohesive, organized, and deadly organization that it is today.”In addition, the lawsuit notes the US government’s various designations for Iran, Iranian entities and Syria as being involved in terrorism, and that the case is brought under the US Foreign Sovereign Immunities Act and therefore seeks both compensatory and punitive damages.“What happened to the Henkin family was a despicable act of murder aided and supported by the governments of Syria, Iran and related entities,” said the Henkins’ lead lawyer Jonathan Missner.“If these despotic regimes think they can get away with murdering American citizens, then they are wrong,” Missner continued. “This lawsuit sends a clear warning that those who finance, support and encourage terrorism must be held accountable and forced to answer for their actions.”Missner, who previously served as a senior AIPAC executive, is joined on the case by Stein Michell Beato & Missner attorneys Andrew Beato, Edward Meyers and Michael Petrino.“The US Justice System provides recourse for victims, and there are procedures in place designed specifically to pursue justice on behalf of American victims of international terrorism,” said Petrino, referring to the Justice for United States Victims of State Sponsored Terrorism Act.The 2015 law established a fund to provide compensation to eligible claimants who hold judgments against state sponsors of terrorism. To date, the fund has paid or allocated over $2.1 billion to eligible claimants, according to the law firm.Speaking to The Jerusalem Post, Petrino also said that the firm was committed to going beyond the partial compensation which the fund usually provides, to find additional as yet unknown Iranian assets to seize in order to get any court award fully paid.He added that while it has taken time to properly prepare the case, now is an important time – in the same month when US President Donald Trump designated the IRGC a terrorist group – to file the case and draw attention to its terrorist activities.The firm is joined by co-counsel Gavriel Mairone of MM Law, LLC, which represents victims of terrorism and war crimes.