Herzog to Abbas: Peace deal can be reached within two years

“The recent terrorist attacks could lead to a third intifada, which we must prevent with all the tools we have,” opposition leader says in Ramallah. 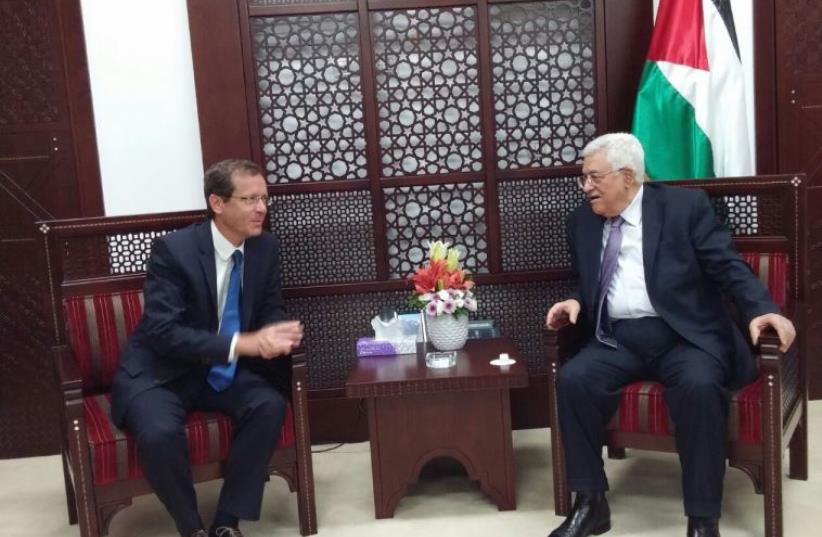 Opposition leader Isaac Herzog meets Palestinian Authority President Mahmoud Abbas in Ramallah
(photo credit: OFFICE OF ISAAC HERZOG (LABOR))
Advertisement
Palestinian Authority President Mahmoud Abbas, in a Tuesday meeting in Ramallah with opposition leader Isaac Herzog, reaffirmed the PA’s commitment to a peace process based on international resolutions that would lead to the establishment of an independent Palestinian state with Jerusalem as its capital on the pre-1967 lines.Abbas stressed the need for all sides to fulfill their obligations to launch serious negotiations that would lead to an end of “occupation” and bring peace and stability to the region, Palestinian officials said.Herzog told the PA president there cannot be compromises in the war on terror, but that peace can come soon if there is enough goodwill.“The recent terrorist attacks could lead to a third intifada, which we must prevent with all the tools we have,” Herzog said.“We must have an uncompromising war on terror, and I am even more extreme than [Prime Minister Benjamin] Netanyahu on that subject.”At the same time, Herzog said both Israeli and Palestinians need to feel that there is hope, and that will happen if courageous steps are taken to restart negotiations, including a true dialogue between leaders.“We should not be afraid. We must dare and ensure a better future for our nations,” he said.Herzog said he is certain that if there is enough goodwill, a peace agreement that ensures security can be reached within two years.There is a rare regional opportunity that cannot be missed and which will give Israel the support of its neighbors for direct negotiations with the Palestinians, he said.“I will continue to try to convince the Israeli public, which is losing faith, that the process is necessary and should be promoted quickly,” he told Abbas.Later on Tuesday, Herzog said that a solution should begin with finding a way for Abbas to control the Gaza Strip and trust-building steps with cooperation from the Saudis, Jordanians, Egyptians and Gulf states.“Saying ‘There’s no chance, there’s no chance’ is the biggest mistake leaders make – Netanyahu and Abbas,” he told Channel 2.“The leaders need to talk and the nations need to talk so that we don’t wake up one day and become an Arab-Jewish state.”