None of the buildings in question have permits, Peace Now said. 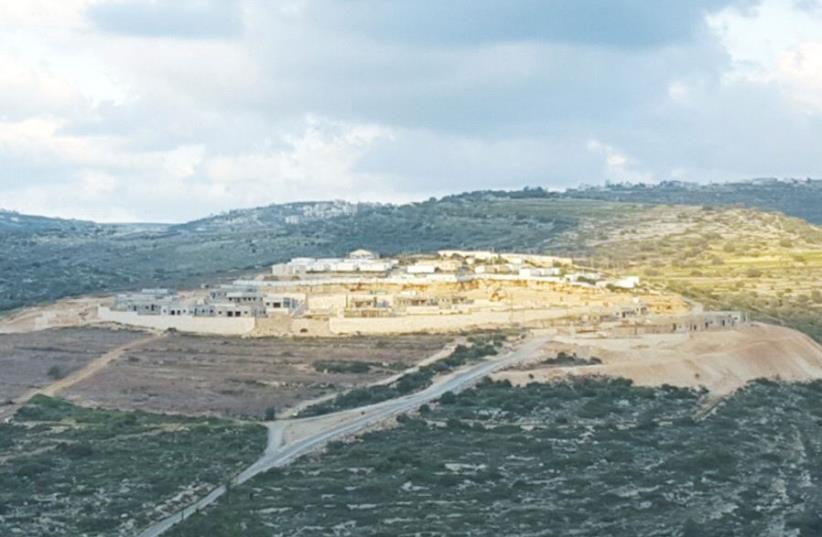 KEREM REIM is shown in this aerial view
(photo credit: COURTESY PEACE NOW)
Advertisement
The High Court of Justice this week issued a temporary injunction against 20 permanent buildings under construction in the West Bank outpost of Kerem Reim. It also froze any transactions with regard to the project, which involves 30 lots.The court issued its order on Sunday in response to a March petition by the leftwing group Peace Now, which also demanded an investigation against the Amana settlement organization and the Binyamin Regional Council for its involvement in the project.The outpost is just outside Talmon, which is located outside of the route of the security barrier and is considered an isolated settlement.The injunction comes just weeks after Israel promised the United States that it would not build new neighborhoods for settlements or allow for the creation of new outposts.According to Peace Now, the Settlements Law, which the Knesset approved in February to retroactively legalize settler homes on private Palestinian property, would not be applicable here because Keren Reim is on state and public land. Several stretches of its access road, however, are on private Palestinian property.While most outposts were built between 1995 and 2005, this particular community in Judea and Samaria was created as a vineyard in 2007.In its petition to the High Court, Peace Now said the outpost was first populated in 2012. Since then, 38 caravans have been installed, some housing a pre-school, a synagogue and a mikve, or ritual bath. In the past few months, it said, work had begun on 30 properties, of which 20 were designated for permanent two-family dwellings.According to Peace Now, the outpost was built without any governmental decision and lacked zoning and planning approvals. It said that in May 2013, however, a plan was for 255 homes was deposited for objections before the Higher Planning Council for Judea and Samaria, but that it had not been advanced.According to a state document submitted to the High Court, a discussion on the matter was held in 2014.None of the buildings in question have permits, Peace Now said.The Civil Administration issued 26 demolition orders against structures in the outpost between 2008 and 2014, Peace Now said. It added that from 2014 to 2016, 57 stopwork orders had been issued, but none had been enforced.Peace Now alleges that the Binyamin Regional Council was involved in the construction and is ultimately responsible for the fact that it had progressed to this point. It specifically cites Avi Ro’eh, who heads both the council and the Council of Jewish Communities for Judea and Samaria.It noted that Ro’eh had promoted the project, including on his Facebook page, where he could be seen touring the area with Knesset Speaker Yuli Edelstein in July 2016. Peace Now alleged that the Binyamin Regional Council had spent NIS 245,700 to build an access road to the outpost. In addition, it said the outpost was listed by the council as one of the communities under its auspices, as if it were a legal community.It noted that this was problematic because it gave the impression to potential homeowners that the community and the homes were legal.Peace Now said: ”By ignoring Illegal construction in settlements and outposts, Israeli governments have allowed a small group of settlers to determine their policy and the future of Israel. While settlers are building illegally throughout the West Bank, law enforcement agencies do not raise a finger in order to stop this phenomenon. We will not let go of the issue until those responsible for illegal activity will be brought to justice.”The Binyamin Regional Council could not be reached for comment.