The updated map makes it easier for the public to understand rocket alert zones by creating less confusing geographical divisions. 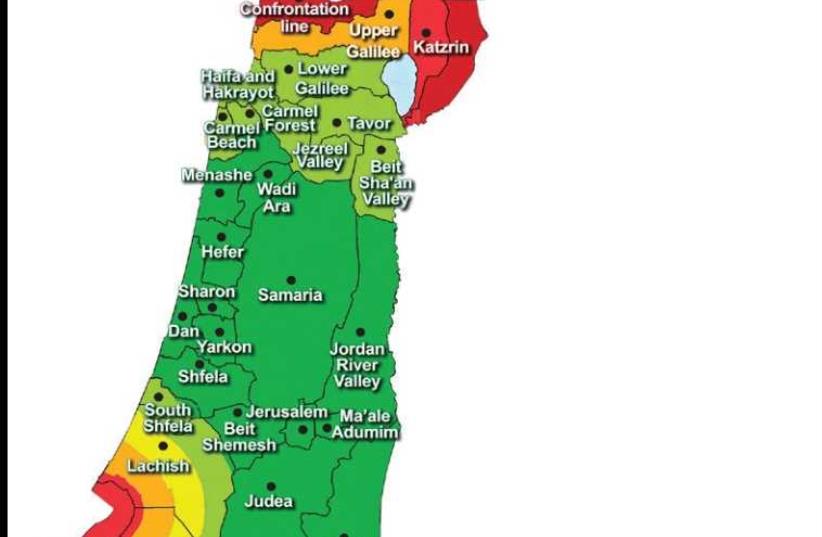 The updated rocket alert map
(photo credit: IDF SPOKESPERSON'S UNIT)
Advertisement
The IDF Home Front Command released an updated version of its rocket alert map on Sunday, showing people how long they have in a given area to seek shelter from rocket attacks.The new map is based on lessons drawn from the 2014 conflict with Hamas in Gaza, Lt.-Col. Tal Michaelovich, head of public information at the Home Front Command, told The Jerusalem Post. It is part of a new public campaign designed to improve awareness among civilians during emergencies.The updated map makes it easier for the public to understand rocket alert zones by creating less confusing geographical divisions, Michaelovich said. During Operation Protective Edge last summer, when a rocket alert appeared on television, the names of cities would appear, even if a siren went off in an area only near the city.Under the new arrangement, this has changed.“A resident of Beersheba, for example will not see his city’s name appear if an alert goes off in Ofakim,” Michaelovich stated.However, since both locations are part of the Central Negev zone; these types of divisions will be used by the Home Front Command to issue regional safety instructions during emergencies, such as school cancellations.“I think that this year, more than ever, the public understands the importance of adhering to instructions, after most of it experienced Operation Protective Edge,” Michaelovich said, referring to the 50 days of rocket attacks on the home front. “Unfortunately, everyone understands the importance of saving lives,” she added.The Home Front Command’s campaign includes a cartoon family that takes steps to prepare for emergencies. “We believe this will lead to improved and more effective preparations,” Michaelovich said.In a statement released on Sunday, the Home Front Command said, “Experience in Israel and in the world proves that emergencies can strike us without prior warning. However, if the public prepares ahead of time, it will cope in a better and more effective way.”