The model ceremony included the various ancient Temple rites prescribed by the Torah and Jewish law, including the slaughtering of a lamb by Cohanim, priests, in the white robes used in Temple times. 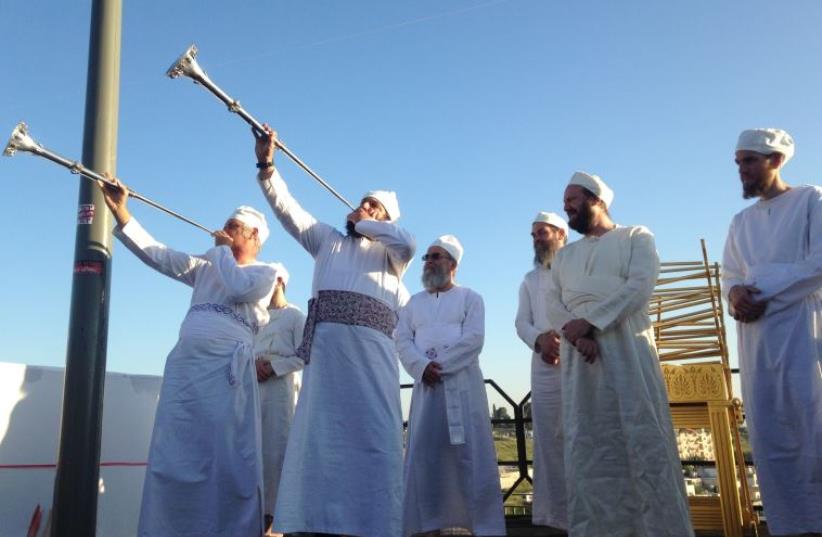 Cohanim priests taking part in the Passover ritual
(photo credit: JEREMY SHARON)
Advertisement
At a model Passover sacrifice ceremony on the Mount of Olives attended by approximately 400 people, several public figures expressed the hope that the Dome of the Rock shrine and the al-Aqsa mosque will soon be removed from the Temple Mount.
Hard-right Jerusalem city council member Arieh King said he hoped that the Temple Mount would soon be free of what he termed “the abomination” currently at the site, while Rabbi Yisrael Ariel, head of the Temple Institute and a former Knesset candidate for the banned Kach party said the event was preparation for when the Temple Mount would be “flattened and cleaned” and the Temple rebuilt.
The model ceremony included the various ancient Temple rites prescribed by the Torah and Jewish law, including the slaughtering of a lamb by Cohanim, priests, in the white robes used in Temple times, the sprinkling of the blood and the burning of fats and other parts of the lamb on a model altar, and the blowing of trumpets by the Cohanim.
It was conducted just next to the Beit Orot yeshiva on the Mount of Olives in full view of the Temple Mount.
The Passover Sacrifice is one of the religious commandments of the Torah obliging Jews to sacrifice a lamb on the Temple Mount on the day before the Passover pilgrimage holiday and eat on the first night of the festival.
The organizers, the Joint Staff of Temple Organizations, emphasized that the event on Monday was a simulation and not supposed to represent the actual sacrifice.
Speaking before the ceremony began, King, who heads the United Jerusalem faction in the Jerusalem Municipal Council decried the current situation in which said that Jews were still prevented by the government from going to the Temple Mount and performing the Passover sacrifice.
“We’re here opposite the Temple Mount,” he continued. “We can see the abomination upon it and we need to wish that even in our days we won’t see it anymore and we’ll see there the altar, the Cohanim and Levi’im and we’ll see ourselves there.”
Also addressing the crowd was Rabbi Yisrael Ariel, who expounded on passages from the Talmud relating to the Temple Mount.
He added “We came here to say we are preparing for when the day will come, when they will flatten the Temple Mount, clean everything out, build the Temple, offer the Passover sacrifice, and all the Jewish people will come up in their droves for the pilgrimage and we’ll see the Cohanim and Levi’im at their service.”
Rabbi Shmuel Eliyahu, another leader of the religious hard-right sector, was also in attendance, and underlined what he said was the importance of realizing that prayers for the rebuilding of the Temple which appear frequently in Jewish are practical.
“When we talk of the Temple we’re talking about something practical and not something imaginary,” he told The Jerusalem Post. “In order to feel how practical this is we are doing this Passover sacrifice ceremony. All Jews, every day for 2,000 years prays three times a day that this will be practical.”
The Hallel prayer service was sung to musical accompaniment after the animal was slaughtered, which was done behind a curtain, and the Cohanim blew ceremonial silver trumpets belonging to the Temple Institute which are designed to be fit for use in the Temple itself.
MK Miki Zohar of Likud attended the event as well, and told the crowd that there had been pressure on him not to attend.
“But I wanted to come to perpetuate the inheritance of the Jewish people,” he said. “My goal in the Knesset is to protect and strengthen the Jewish idea in the State of Israel. Strengthening this principle is an integral aspect of my work, because this is the only way to justify our rights to this land.”