During the interview, Hotovely was asked 12 times if she, personally, supports a Palestinian state. 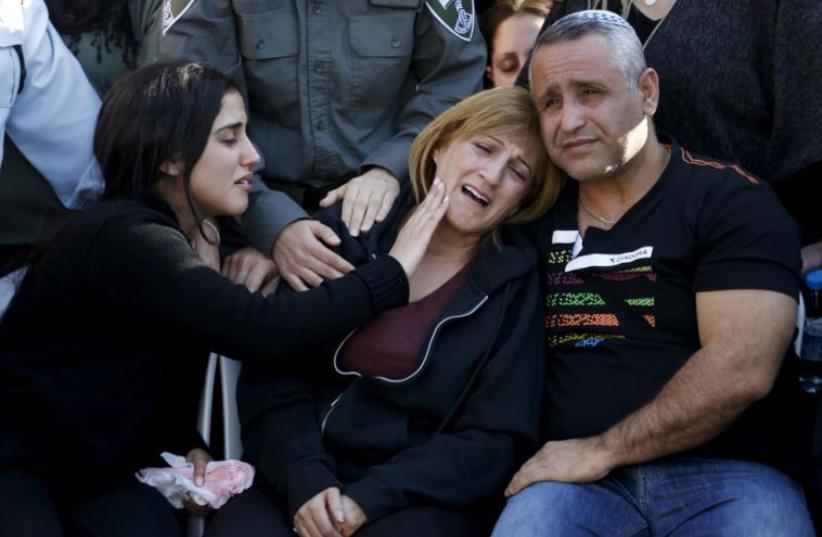 The parents of Border Policewoman, Hadar Cohen, 19, mourn during their daughter's funeral at the military cemetery in Yehud
(photo credit: REUTERS)
Advertisement
Unbridled hatred, not frustration, is the cause of Palestinian terrorism, Deputy Foreign Minister Tzipi Hotovely said in an Al Jazeera interview on Friday.The highly combative tone of the interview was set at the outset when the interviewer, Mehdi Hasan, asked Hotovely whether Israel would apologize to UN Secretary- General Ban Ki-moon for saying “pretty outrageous” things about his recent comments interpreted in Israel as having provided a “tailwind” for terrorism.“You need to first of all condemn terrorism, and tell Palestinians to stop using knives on a daily basis against Israeli citizens,” she said.When Hasan presented selected quotes from Israeli defense officials and asked if they were “apologists” for terrorism as well, Hotovely said that in a democracy there were many different opinions, and that he had provided just “one side of the picture.”“Of course there are many other people that are saying that the Palestinians choosing [to join] the extremists are under the influence of ISIS and the atmosphere of how the youngsters are raised, and under the hard incitement of the Palestinians Authority,” she said.

Hotovely said that the claim that the Palestinians terrorists were acting under the duress of frustration is “absolutely wrong,” and that the proof is the fact that during the heyday of the Oslo Accords in the 1990s, “when the Palestinians had the best hope for a Palestinian state,” the terrorism did not stop.“It means that terrorism is the main issue, not frustration,” she said.Hasan seemed to be shouting at Hotovely when he asked her time after time whether she personally supported a Palestinian state, to which she replied: “I’m representing a government that is declaring in a very clear way on a policy of a two-state solution... I am representing the policy of my government.”Asked what she wanted to see happen to the Palestinians on the West Bank, she said, “Very simple, I want to see the Palestinians become my neighbors, not my enemies; right now they are choosing to be my enemies, not my neighbors.”Asked if they would get the right to vote, she replied: “It depends what path they are going to choose.” The violence against Israel, she said, is something the country needs to fight.“We need to live first of all the near future,” Hotovely said. “In the near future we have to fight terrorism no matter where it is coming from. You are asking me about future infrastructures? Well look at the Middle East, the Middle East is falling apart, you see countries don’t exist anymore, so we need to be very sure and clear that a Palestinian Authority can control the messaging and can control the youngsters when it comes to the coming future.”