Since the start of the olive harvest in early October, Palestinians have been picking the small fruit in the farmlands near the West Bank’s cities and villages. 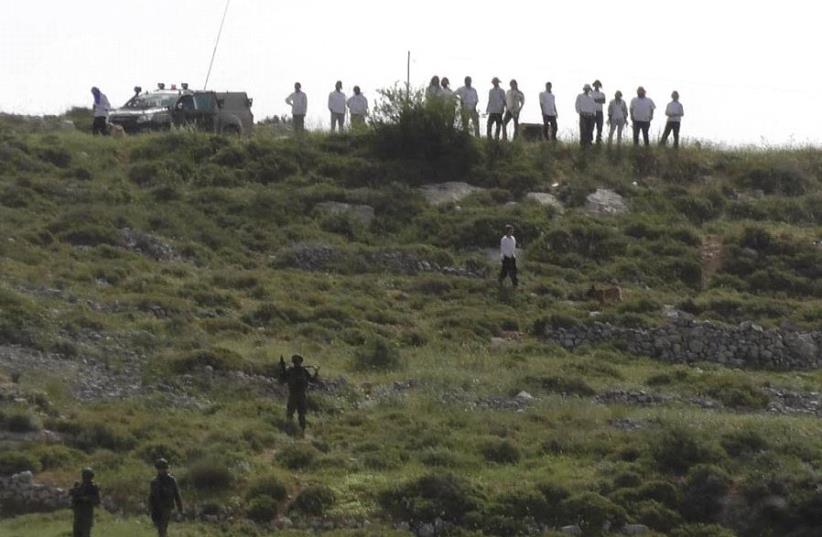 Settlers and IDF soldiers stand on a hilltop outside the Yitzhar settlement
(photo credit: YESH DIN)
Advertisement
A group of settlers taunted and threw rocks at Palestinian olive harvesters near the Yitzhar settlement south of Nablus on Sunday morning, Rabbis for Human Rights field coordinator Zakaria Sede said.Since the start of the olive harvest in early October, Palestinians have been picking the small fruits in the farmlands near West Bank cities and villages.“The settlers yelled and threw rocks at the farmers,” Sede, who accompanied the harvesters, said in a phone interview. He added that a large number of IDF soldiers quickly arrived at the scene, took control and ensured the harvesters could pick olives. “When the soldiers arrived, they did their job well and made sure the farmers could harvest their olives,” Sede said. “But the army should have expected the settlers would cause problems and sent large numbers of soldiers ahead of time.” The IDF spokesman said settlers and Palestinians took part in “violent confrontations” before troops arrived and stopped them.When asked how the two sides participated in the confrontations, the spokesman declined to elaborate.Sede, as well as Huwara Mayor Nasser Oudeh, denied that the Palestinian harvesters acted violently in any way towards the settlers. “The Palestinians did not push anyone or throw rocks. They only told the settlers to go away,” Oudeh, who was also present at the scene, said in a phone call. Yitzhar spokesman Avraham Binyamin, who was not present at the scene, said that he was unaware if settlers had yelled or threw rocks at the harvesters.“I don’t know anything about that,” he said in a phone call. He added that there was no reason for the Palestinians to harvest near Yitzhar other than to carry out a “provocation.” “There are barely any olive trees in the area. So the main reason they came was to participate in a provocation,” Binyamin said.Sede denied Binyamin's description of the area, asserting that the harvesters picked olives all day on Sunday and plan to pick more on Monday and Tuesday. Binyamin also said that harvesters have previously taken advantage of picking olives near Yitzhar to carry out attacks against its residents. "There presence there is very dangerous," he said. Sede also rejected this accusation.Anna Ahronheim contributed to this report.