The family of the suspected bomber announced that they would not be receiving condolences until they receive and bury his body. 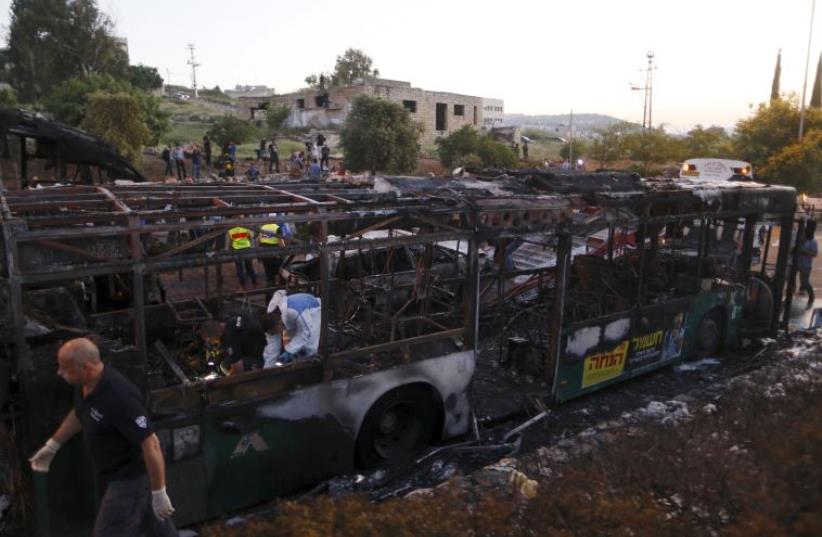 Police forensic experts work at the scene after an explosion tore through a bus in Jerusalem
(photo credit: REUTERS)
Advertisement
A mass demonstration took place on Wednesday as hundreds marched near the house of the family of the Palestinian suspected of carrying out Monday’s bus bombing, in a show of solidarity “for the young martyr.”Abdel Hamid Abu Srour, 19, a resident of the Aida refugee camp near Bethlehem, who is suspected of detonating an explosive on a bus near the Patt junction in Jerusalem that left 20 wounded, died on Wednesday following multiple surgeries.Abu Srour was named after his grandfather, who was killed in an Israeli bombardment on the headquarters of the Democratic Front for the Liberation of Palestine, which operated in Lebanon in the days of the Israeli incursion to south Lebanon in the 1980s.A review of Abu Srour’s social media profiles revealed that the teenager was a great fan of Hamas. He shared multiple banners in support of the movement and wrote comments revealing his admiration for Yahya Ayyash, chief bomb maker for Hamas, who was killed by Israel in January 1996.Participants in the march chanted “Ayyash will come back.”During Ayyash’s tenure, Hamas has carried out the most lethal suicide bombings in Israel’s history.The crowd extolled Abu Srour, shouting “Prepare your swords, we are the sons of Muhammad Deif,” referring to the commander of Hamas’s military wing, who survived an assassination attempt by the IDF during Operation Protective Edge in August 2014.The family of the suspected bomber announced that it would not be accepting condolences until it received and buries his body.