Israeli terror victim to UN: Palestinian neighbors comforted us, but you ignored us

Natan Meir, husband of Dafna Meir who was stabbed to death in their home, sent an emotional plea to UN Secretary General Ban Ki-moon. 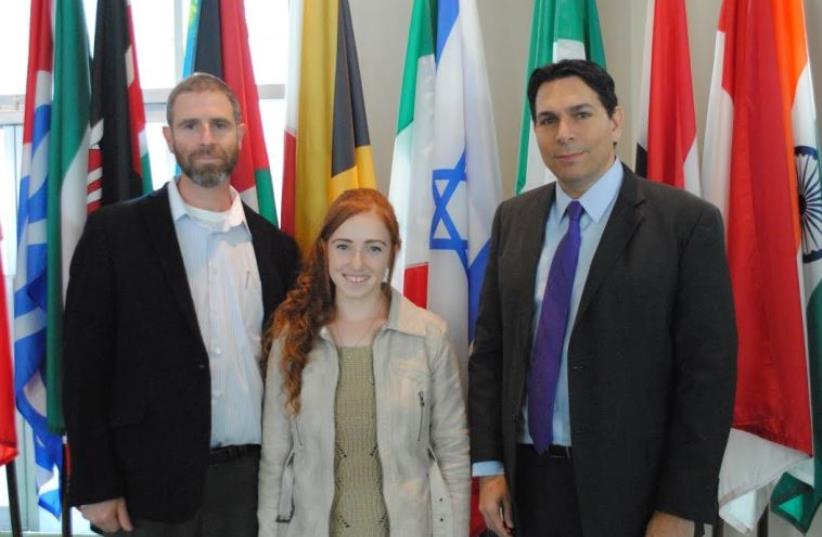 The Meir family and Ambassador Danon at the UN
(photo credit: Courtesy)
Advertisement
Natan Meir chastised the United Nations for ignoring the pain caused by the loss of his wife, Dafna, whom a Palestinian teenager stabbed to death in front of their children in January.“You should know that many of my neighbors who are considered Palestinian Arabs have sent condolences, looked me in the eye and came to my house, Meir wrote in a letter to UN Secretary-General Ban Ki-moon. “They know and I know that true peace will be achieved by the common people,” Meir continued.He posted copies of the letter in Hebrew and English on his Facebook page.In it, he described the disturbing experience he and his oldest daughter, Ranana, had, when they attended the April 19 UN Security Council open debate on the Middle East, that included the airing of issues regarding the Israeli-Palestinian conflict.Both he and his daughter spoke with reporters prior to the meeting. Ambassador to the UN Danny Danon also referenced their story during his speech to the Security Council.But no one on the council reacted to the story of how a 38-year-old mother of six was murdered in her home, he said.“Not a single ambassador of the nations of the world bothered to come and comfort my 17-year-old daughter. Not one came up to shake our hands.No one called or met with us before or after. No one wrote a letter. Even you, Mr. Secretary- General, while sitting at the head of that meeting, did not reach out to us or take notice of our anguished faces,” he wrote.Meir explained that he understands that the UN believes it is problematic that he lives in a West Bank settlement.But at the same time, he noted that he is also a pained citizen of the world.How can the United Nations be relevant, “when there is not a drop of the most basic humanity?” he asked.“Where are the aspirations for humanity, which form the basis of the establishment of the institution you lead? Is such a body able to prevent hatred, animosity and inequality?” he continued.
“Dear Secretary-General,” Meir wrote further, “as the organization of the Untied Nations celebrates the rights of Palestinians, it is crucial to remember that the Jewish national dream is to inherit the cities which they have dreamed of for thousands of years.”The resolution of the conflict must take into account both the Palestinians and the Israelis in a way that builds bridges between the two groups rather than divides them, he said.“The United Nations demands that Israel implement the vision of a political separation by fences and borders,” Meir wrote.“Where is the peace in this solution?” he asked.“In this solution, there are no human rights and no democracy. It is based on a shocking element of racism! Would anyone conceive of separating people in a Western city, where riots have occurred, by the ethnic origin of the rioters?” he said.Meir said that he believes that the roots of the conflict in the Middle East are “religious fanaticism and lack of understanding.“Therefore, the clergy must lead the process of historical reconciliation between nations. The United Nations, whose secular worldviews are at the base of its existence, could help if you recruited great leaders of different religions to lead the process of promoting peace.“Make it possible for us to patiently advance our shared lives for posterity. If you would like to help, please help us to build bridges and connections between people, rather than borders and fences,” he said.
Advertisement
Subscribe for our daily newsletter