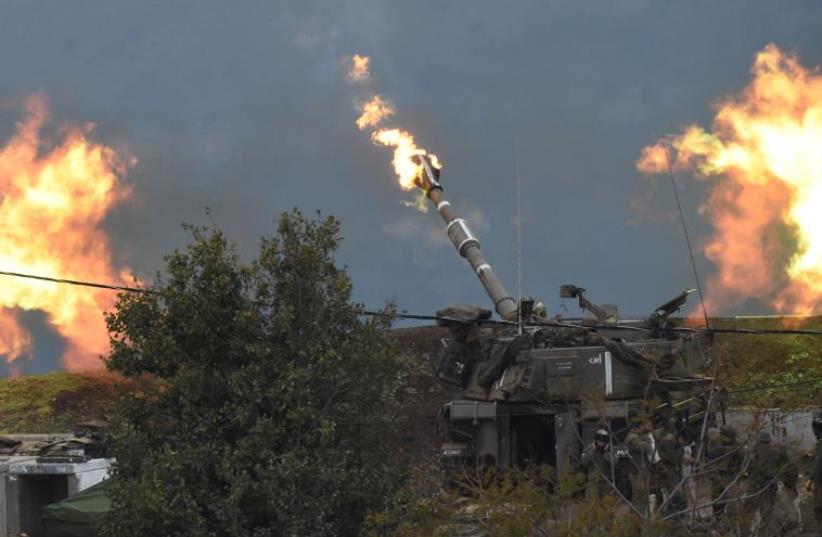 An IDF artillery gun fires a shell into Lebanon, after a roadside bomb exploded next to an IDF military border patrol near the Sheba Farms area near Kiryat Shmona, Israel, January 4, 2016.
(photo credit: REUTERS)
Advertisement
A senior IDF officer told a Saudi newspaper on Monday that "the IDF could put Lebanon back 300 years and in parallel conquer the Gaza Strip and destroy all of its infrastructure." The officer told journalist Majdi Halbi of the Elaph news site that despite the IDF capability, the army is subject to the political echelon that in the officer's estimation will not order such action.  Regarding Hezbollah leader Hassan Nasrallah's threat to target the ammonia plant in Haifa, the officer said Israel was prepared for such an attack and was aware that its strategic infrastructure could be cut off during a confrontation with the militant Shi'ite organization. "The organization [Hezbollah] and its leader know very well what Israel's reaction will be, so it will not set out on such an adventure," he said.  The officer revealed that Israel sent messages to Hezbollah, via a third party country, warning it to think twice before attacking Israel and that it would regret the action.  "Just like what happened during the Second Lebanon War in 2006," he added. The officer said it was possible that Hezbollah was digging attack tunnels on the northern border with Israel, and that Hezbollah was expert in using tunnels in populated civilian areas during war but he didn't expand further on the topic. "Israel respects its enemies capabilities and assumes that they are capable of espionage. Nasrallah is a serious leader and he knows what Israel's reaction will be  if he attacks. He should leave the current situation on the border as it is without embarking on a path that will destroy everything that he has built," the officer said. On Gaza, the senior officer said it is a question of "when and not if" regarding the next military confrontation with the coastal enclave, adding that "such a clash could happen sooner rather than later due to the fact that Hamas's situation is deteriorating." "We estimate that there are attack tunnels leading from the Gaza Strip into Israel but we do not have the ability to prevent all of them with 100 percent success. We are prepared for a confrontation that will bring about great destruction, but we hope that we will not get to this situation," he said.