Palestinians tried to disrupt the demolition by throwing rocks, petrol bombs and IEDs at the forces, resulting in two soldiers being lightly wounded.

By JPOST.COM STAFF
APRIL 20, 2016 08:37
IDF demolishes home of terrorist who murdered Shlomit Krigman
Advertisement
The IDF Spokesman has reported that over the course of Wednesday night, IDF and Border Police forces carried out the destruction of terrorist Mohammed Hussein Abu Hussein's house in Kalandiya. During a number of disturbances throughout the demolition, Palestinians threw rocks, petrol bombs and IEDs at the soldiers, resulting in two soldiers being lightly wounded. In response, the IDF used riot dispersal methods, including the targeting of ringleaders. 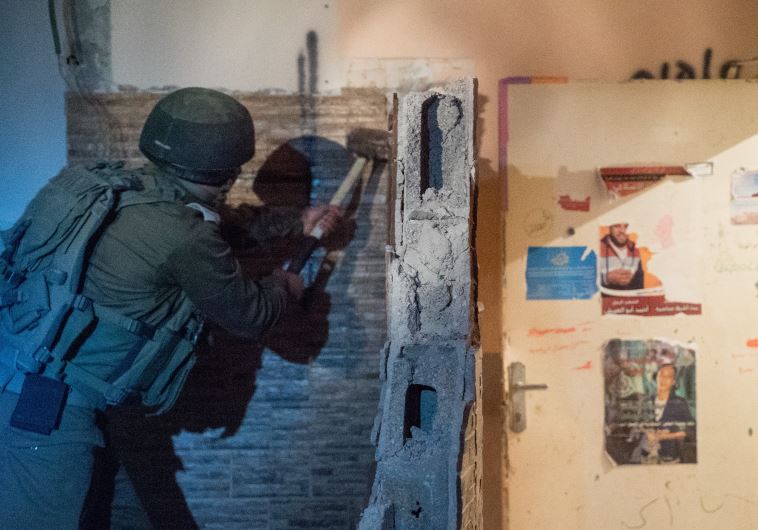 IDF soldier taking part of the destructio of the home of Shlomit Krigman's killer, April 19 2016 (Credit: IDF Spokesperson's Unit)Hussein had carried out a deadly stabbing attack, murdering 23-year-old Shlomit Krigman and wounding another civilian in the attack on the West Bank settlement of Beit Horon in January. Hussein and his accomplice stabbed the two Israeli women and threw pipe bombs at a grocery store in the settlement.
During the attack, cashier Mordechai Shalem used a large metal shopping cart to stop them from entering the store, saving the lives of those who were inside.
The assailants fled from the store in the direction of homes in the settlement, but within moments a security guard shot and killed them.
A statement released by the Beit Horon community described Krigman as "loved and known, during her national service [Shlomit] served as a youth group leader for the Bnei Akiva branch in Beit Horon. Over the past year, she was living with her grandparents in the Krigman family home in the community."
Advertisement
Subscribe for our daily newsletter