The order was issued after Ofra residents had called for the Palestinian assailant's home to be demolished and for action to be taken against his village. 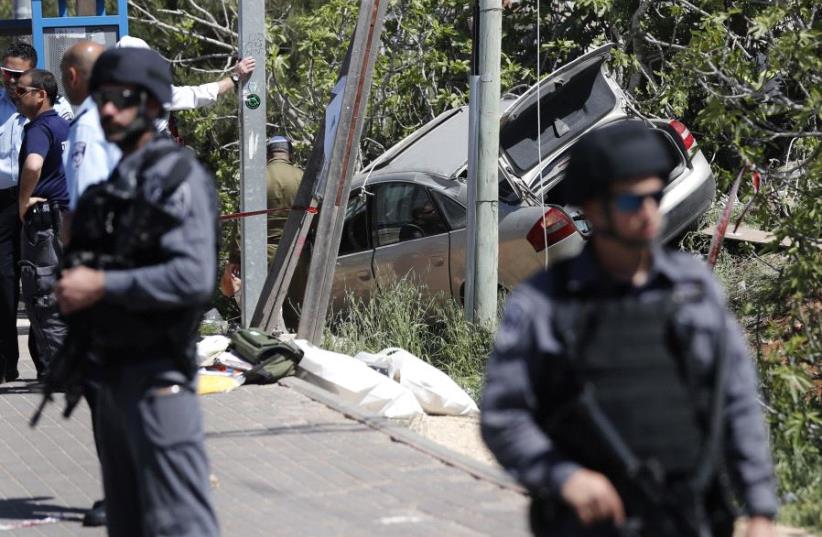 Israeli security forces gather at the site of a car ramming attack outside the Israeli settlement of Ofra, north of the Palestinian city of Ramallah, on April 6, 2017
(photo credit: THOMAS COEX / AFP)
Advertisement
The IDF on Thursday afternoon froze the work permits of the family of the Palestinian terrorist who killed IDF Sgt. Elchai Teharlev, 20, as he stood guard at the bus stop on Route 60, just outside of the Ofra settlement.On Thursday morning, Malik Hamad, 22, from the nearby Palestinian village of Silwad, rammed his car into Teharlev, killing him almost instantly and lightly injuring a 19-year old soldier who stood with him.
IDF soldier killed in Ofra Junction ramming attack (credit: REUTERS)
Security forces interrogated his family in the afternoon.The Coordinator of Government Activities in the Territories Maj.-Gen Yoav Mordechai rescinded the work orders after Ofra residents called for Hamid’s home to be demolished and for action to be taken against his village.The Ofra residents said that Prime Minister Benjamin Netanyahu and Defense Minister Avigdor Liberman must “instruct the security forces to use an iron fist against the hostile village [Silwad] that educates hatred and murder of Jews and who has produced a long line of Jewish murderers over the years.”President Reuven Rivlin said, "The security services are working tirelessly to keep us safe, in a complicated battle in which the home front and the front line are one and the same." "We will never allow terror to weaken us. Israeli society is strong, and we must stand firm in defense of our state and our land," Rivlin said.In response to the attack, MK Oren Hazan (Likud) called on Defense Minister Avigdor Liberman to deport the assailant's family."People might say that this attack is a result of MK Ayman Odeh's remarks yesterday, comparing Israel's activities in Gaza to President Bashar Assad's war crimes in Syria."Personally, I reckon that that the reason [to carry out the attack] is that: They simply hate us! Anyway the reasons are not important, what matters is the harsh outcome, and we need a proper response."I call on the defense minister to deport the murderer's family before the holiday," he said.IDF Sgt. Elchai Taharlev (right), 20, from the West Bank settlement of Talmon, victim of Ofra Junction ramming attack (ABBAS MOMANI / AFP/Courtesy) Meretz chairwoman MK Zehava Gal-On, meanwhile, sent her condolences to the Taharlev family. Elchai is one of seven children. His father, Rabbi Ohad Taharlev, is the head of the Israeli program at the Lindenbaum Seminary.Gal-On said that the attack shows why Israel must take diplomatic moves to advance peace with the Palestinians."This is a painful day to the family and to the whole community," she said. "This attack proves once again the 'handling the occupation policy' by our government is not working and does provide security to Israel's citizens and soldiers."Israel must determine its faith and promote a diplomatic move for peace," she added. "Without it, we will never see here long term security stability."