Such closings are not uncommon during Jewish holidays. 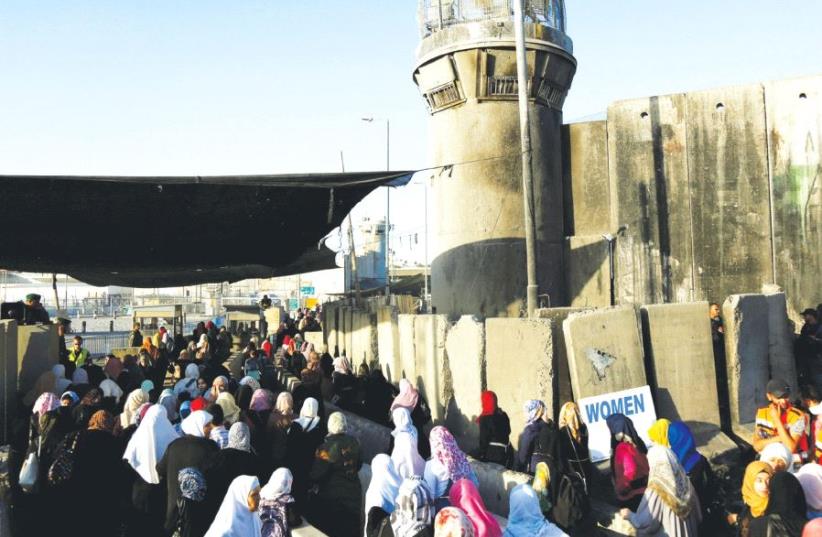 Palestinians wait to cross through Kalandiya checkpoint into Israel, near Ramallah.
(photo credit: REUTERS)
Advertisement
The IDF has imposed a four-day closure of the West Bank and Gaza for Purim, the army has announced.The closure is scheduled to be in effect from Tuesday through midnight Saturday, and will see all crossings shut “with the exception of humanitarian, medical and exceptional cases” approved by the Coordinator of Government Activities in the Territories, or COGAT, the IDF said in a statement.Tens of thousands of Palestinians who work legally inside Israel on a daily basis will be affected by the closure. Those who work in Israeli settlements in the West Bank will not be affected.The army usually imposes a closure on the West Bank prior to all major Jewish holidays.Closures have not historically been imposed over Purim, however, this is the third year in a row for a Purim closure.An uptick in tensions and violence have often occurred during holidays. Several terrorist attacks have been launched during Purim, including a deadly suicide bombing in 1996, in which a Palestinian suicide bomber blew himself up outside Tel Aviv’s Dizengoff Center and killed 13 Israelis, including five children, and wounded 130 more.In 2015, Israel’s Shin Bet security service broke up a Hamas cell that was planning terrorist attacks against IDF targets in Abu Dis near Jerusalem on Purim.Two years ago on Purim, IDF St.-Sgt. Elor Azaria shot and killed an incapacitated Palestinian attacker, Abdel Fattah al-Sharif, following a stabbing attack against soldiers in Hebron.Purim begins throughout most of the country on Wednesday evening and in Jerusalem on Thursday evening.