IDF imposes siege on Palestinian villages in which terrorists lived

The terrorist who killed an American tourist and wounded many others in a stabbing spree in Jaffa was identified as Bashar Massalha, 22, from the village of Uja. 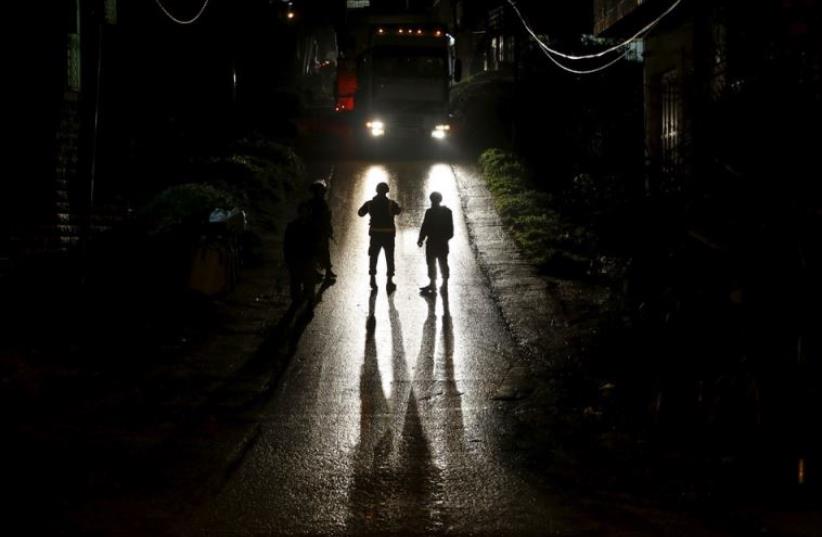 Israeli army soldiers stand guard as bulldozers demolished two houses in the West Bank village of Dier Samit, south of Hebron
(photo credit: REUTERS)
Advertisement
The IDF on Tuesday night imposed a blockade on the West Bank villages of the Palestinian terrorists who carried out stabbing attacks earlier in the day in the Israeli cities of Jaffa and Petah Tikva. Also in light of intelligence information, police forces were carrying out searches at the house of another terrorist who shot and wounded two Border Police officers in an attack in Jerusalem on Tuesday afternoon. According to Palestinian reports, the terrorist who killed an American tourist and wounded many others in a stabbing spree in Jaffa was identified as Bashar Massalha, 22, from the village of Uja in the Kalkiliya area. The reports noted that Massalha had returned from a visit to Saudi Arabia's Mecca the week before. The terrorist in the Petah Tikva stabbing that left one Israeli wounded was said to be Abed al-Rahman Radad, a 17-year-old resident of the northern West Bank town of Zawiya.Prime Minister Benjamin Netanyahu held emergency consultations with his defense chiefs late Tuesday following the wave of terrorist attacks that gripped central Israel just hours earlier.The meeting was attended by Defense Minister Moshe Ya’alon, Public Security Minister Gilad Erdan, Police Commissioner Roni Alsheich, the coordinator of government activities in the territories Yoav Mordechai, and representatives from the IDF and the Israel Security Agency (Shin Bet).The meeting ended with the participants resolving to take a number of immediate steps aimed at stemming the tide of Palestinian violence, including: sealing the gaps in the fence which runs through the Jerusalem area; building a fence in the Tarkumiya region; advancing legislation that would levy penalties for those who aid and abet illegal aliens and labor migrants; shutting down media outlets that propagate incitement; and revoking work permits.Police said that after a situation assessment by the senior police brass and Erdan, they had decided to increase their manpower and patrols across the country as a result of Tuesday's attacks. They added that they have not found any linkage between the four attacks and that they had no prior warnings. They also said it's possible that the visit by Vice President Joe Biden which began on Tuesday was a trigger for the attacks. Ben Hartman contributed to this report.