At around 1:30 p.m. on May 14, Judea and Samaria District police said that a black vehicle struck two pedestrians at the Alon Shvut junction before fleeing the scene. 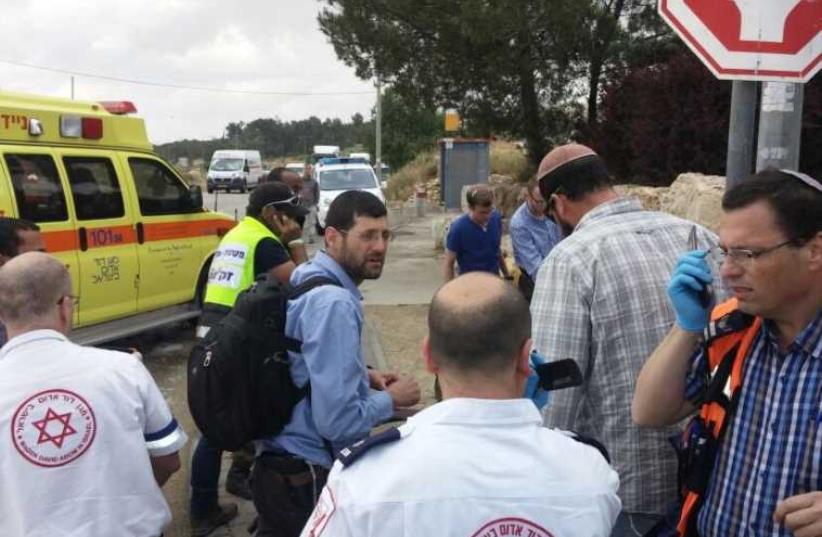 The scene of the vehicular terror attack at Alon Shvut junction in the West Bank‏.
(photo credit: GUSH ETZION REGIONAL COUNCIL)
Advertisement
The IDF announced Thursday that it has filed an indictment with the Judea Military Court against Mahmoud Arafia for perpetrating the May 14 terrorist attack at the Alon Shvut junction, in which four Israeli civilians were wounded.At around 1:30 p.m. on May 14, Judea and Samaria District police said that a black vehicle struck two pedestrians at the Alon Shvut junction before fleeing the scene.Two victims, aged 16 and 17, were brought to the capital’s Shaare Zedek Medical Center, one moderately wounded with wounds to the hip and the other lightly wounded.Two other victims were brought for treatment at Hadassah-University Hospital in Ein Kerem: a 20-yearold man in serious condition and a 25-year-old man with light injuries.One of the wounded was a dual US-Israeli citizen in serious condition with a head injury, a relative said. The family member described the man as a 19-year-old studying at a yeshiva near the scene of the incident.When Arafia saw a group of Israeli civilians waiting at the Alon Shvut junction, he made a hard turn toward them, driving against traffic, and rammed the four.The indictment also accused Arafia of a separate count of attempted murder for having tried to carry out a similar attack about two months earlier. The IDF asked the court to extend Arafia’s remand through the end of his trial.Ben Hartman contributed to this report.