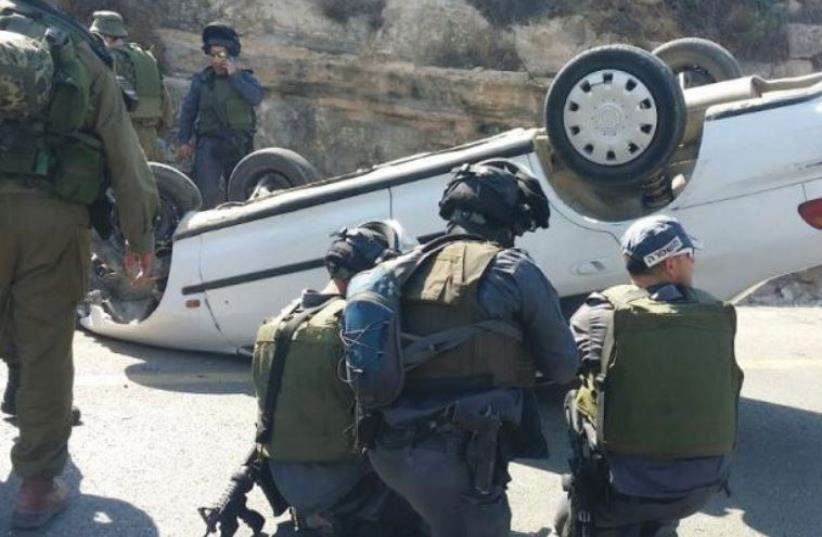 THE TERRORIST driver of this car ran down and wounded two soldiers on Route 60 in August, before he was shot and lost control of the car, which overturned
(photo credit: TAZPIT)
Advertisement
An IDF paratrooper who sustained critical injuries when run down by a Palestinian terrorist on Route 60 in August has regained consciousness, and is set to begin a lengthy rehabilitation program.St.-Sgt. Yuval Appel recently opened his eyes, according to the IDF’s Bamahane weekly magazine.The IDF Spokesman added that doctors at Hadassah-University Medical Center in Jerusalem’s Ein Kerem, where Appel is hospitalized, listed him as being in satisfactory condition since September 2, following his gradual improvement.Appel was placed on a ventilator and kept sedated for over a month following the terrorist attack near the Shiloh junction. A Palestinian driver rammed his vehicle into several soldiers, before being shot and seriously wounded.St.-Sgt. Yarin Ashkenazi, a fellow paratrooper, was also critically wounded in the attack. Doctors sedated him and placed him on a ventilator following the attack, but his condition improved and he regained consciousness within a few days.Lt. Daniel Albaz, who was lightly wounded in the attack, shot and seriously wounded the Palestinian driver.The soldiers were part of a unit that had been stationed in the area to deal with flare-ups in the aftermath of the deadly arson attack on a Palestinian home in the village of Duma, where a Palestinian toddler and both his parents were murdered by masked terrorists who hurled firebombs into their home.The defense establishment said Jewish extremists were behind the firebombing.