Senior security source: No one in Palestinian Authority is condemning the murder of a 13-year-old in her bed; 2 more battalions deployed to West Bank 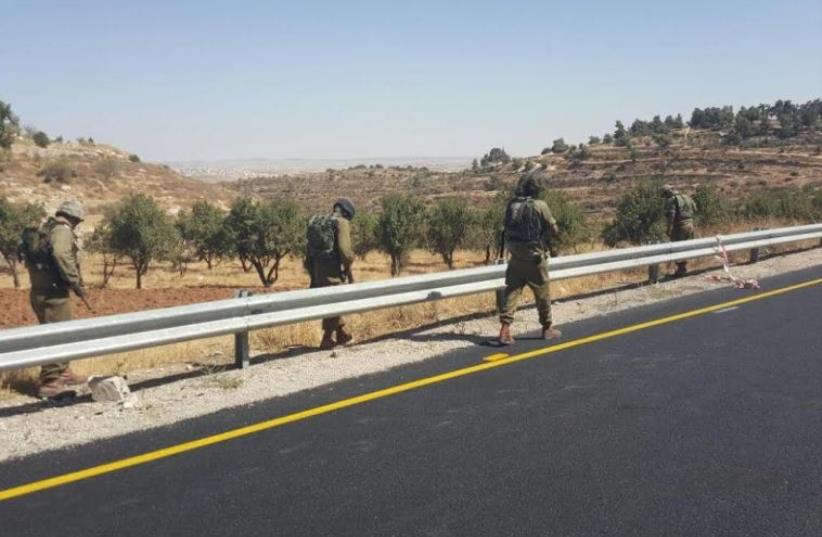 Soldiers searching for the shooter on Route 60
(photo credit: COURTESY IDF SPOKESMAN'S OFFICE)
Advertisement
The IDF has placed greater Hebron under general closure on Friday afternoon, in an effort to disrupt a series of deadly terror attacks on Israelis in the past 48 hours. Only humanitarian journeys will be allowed out of the city and its suburbs for the duration of the closure. The area is home to 700,000 Palestinians, and security forces have launched a massive hunt there for the shooting cell behind an attack on a family on Route 60. A father was shot dead, and his wife and two children were wounded in the attack 15 kilometers south of Kiryat Arba. Security forces believe the attack took the form of a drive-by shooting from short range. A senior security source said the end of the Ramadan period has seen an upsurge of terrorism in past years as well. He also noted the failure by any figure in the Palestinian Authority to condemn the murder on Thursday of a 13-year-old Israeli girl in her bed in Kiryat Arba. "I don't see anyone saying, stop, this was a 13-year-old girl. We are clearly seeing ongoing incitement in the PA," the source said. The IDF has sent two back-up battalions to the West Bank, and beefed up the number of units guarding roads and communities. The last time Hebron was placed under closure was in June 2014, following the kidnap and murder of three Israeli teenagers by a local Hamas cell. The source said the closure would assist intelligence efforts to track down the shooting cell. "The goal now is to disrupt the flow of attacks," he said. "We have also cancelled all work permits in Israel for residents of Bani Naim [from where the knife attacker behind Thursday's killing came from]. These steps come following instructions from Defense Minister Avigdor Liberman, who has been in consultations with the chief of staff [Lt.-Gen. Gadi Eisenkot], and the prime minister [Benjamin Netanyahu]," the source said. The IDF also raised the age of Muslim worshipers authorized to travel to Jerusalem to mark Laylat Al-Qadr, one of the last ten days of Ramadan. "This is not our first shooting attack. Raising the numbers of our personnel in the field where there is friction between Jews and Palestinians has worked as a technique in the past. We must make sure our soldiers are alert and responsive," the source said. "If we do not place our hands on the shooting cell [behind Friday's attack], there will be further attacks," the source warned.