Israel Radio cited Syrian rebel sources as reporting Tuesday that some opposition forces had taken over several hills near Mount Hermon on the Golan Heights. 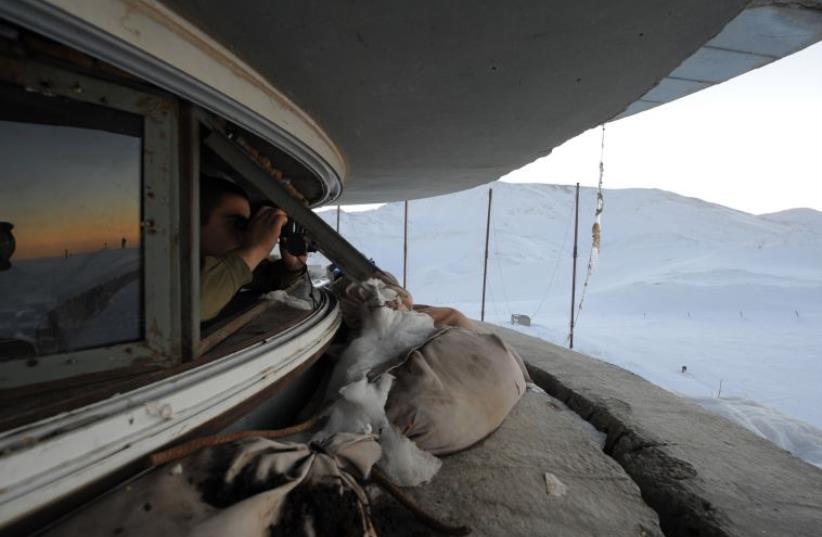 An IDF soldier looks out from a position on Mt. Hermon
(photo credit: IDF SPOKESPERSON'S UNIT)
Advertisement
The IDF and Israel Police declared a section of the northeast Golan Heights a closed military zone on Tuesday – then lifted the decree hours later and returned the area to normal.These decisions – the former of which closed off the area to civilians and tourists who were not local residents – came after intensive battles between Assad-regime forces and rebels on the Syrian part of the border in recent days.Early Tuesday morning, al-Qaida’s Nusra Front killed one Syrian Druse officer and wounded 10 others in the border town of Hader, according to Mendi Safadi – an Israeli Druse who has served as Deputy Regional Cooperation Minister Ayoub Kara’s chief of staff, and who has traveled in the region and met with Syrian opposition activists.The attack took place inside the village, he said, though there is a Syrian army base located nearby.Israel Radio cited Syrian rebel sources as reporting Tuesday that some opposition forces had taken over several hills near Mount Hermon on the Golan Heights after fierce fighting with the Syrian regime and Hezbollah forces.The border closure was not directly related to the Syrian fighting, IDF sources said. It was designed to prevent civilian gatherings in areas near the border fence, which could disrupt ongoing IDF security activities.In a statement, the army said it was “following the fighting in Syria from up close, as well as developments on the border of the Golan Heights, and acting to safeguard security in the area.”The move came after members of Israel’s Druse community, concerned about the fate of Syrian Druse across the border due to threats by Islamic State and the Nusra Front, stepped up a public campaign to help their brethren. While the IDF decision was meant to keep them from holding demonstrations near the border, Israel signaled readiness on Tuesday to intervene if Syrian refugees thronged its armistice line on the Golan Heights.Israel has sought to keep out of the four-year-old crisis in Syria – an old foe from which it captured the strategic Golan in the 1967 war, and where it fears more belligerent Islamist fighters could take over should President Bashar Assad fall.IDF Spokesman Brig.-Gen. Moti Almoz said the top brass had held a Golan assessment on Tuesday “as part of the common cause and blood-alliance between us and our Druse brothers in the State of Israel.”But in a statement posted on Facebook, Almoz said the Israeli side of the Golan was “calm, without irregular events.”He also said that IDF Chief of Staff Lt.-Gen. Gadi Eisenkot had ordered no change to current deployments.For his part, Eisenkot said in a closed-door meeting that the IDF was prepared to help refugees on the Syria-Israel border and would do everything possible to keep them from being massacred.He pointed out that there were hundreds of thousands of refugees in Syria, and many more in Jordan and Lebanon.Eisenkot also said Hezbollah was in strategic distress, having lost hundreds of fighters in the Syrian war – 100 in the last month alone.At the same time, though, he said Hezbollah was improving its capabilities in the use of armed drones, missiles and rockets.Kara, meanwhile, said he would appeal to the government to allow humanitarian aid and Israeli Druse to cross the border to aid their brethren.