The Shin Bet and IDF arrested the driver early on Friday during a raid. 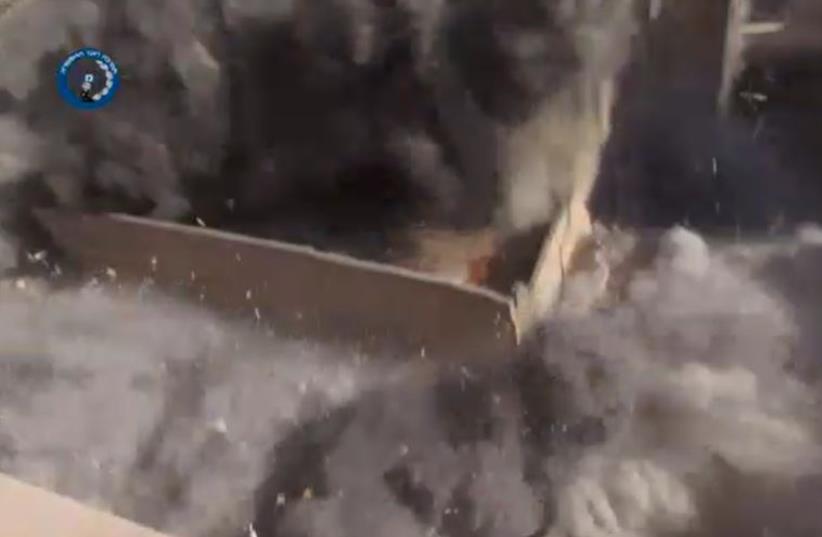 Police release footage of terrorists home being blown up
(photo credit: ISRAEL POLICE)
Advertisement
The IDF on Sunday prepared a home for demolition belonging to a terrorist who ran down four soldiers with his vehicle last week. Acting under orders from the security cabinet, units from the IDF Artillery Corps Reshef Battalion and the Civil Administration "mapped out" the home of Muhammad Salam in the West Bank village of A-Luban.Salam is the terrorist who attempted to carry out a vehicle ramming attack near Beit Aryeh on Thursday.Four IDF soldiers were wounded in that attack, when a black Isuzu vehicle plowed into the soldiers as they were carrying out a road-security mission, then sped away.The Shin Bet and IDF arrested the driver early on Friday during a raid.During initial interrogations Salam admitted to carrying out the attack, security forces said.Elsewhere in the West Bank, IDF and Judea and Samaria Police arrested nine security suspects overnight between Saturday and Sunday. Three of them were wanted for their alleged roles in unorganized terrorism and rioting targeting Israeli civilians and security forces.Hamas members were arrested in the raids as well, in Bethlehem, and A-Tus, southwest of Hebron.