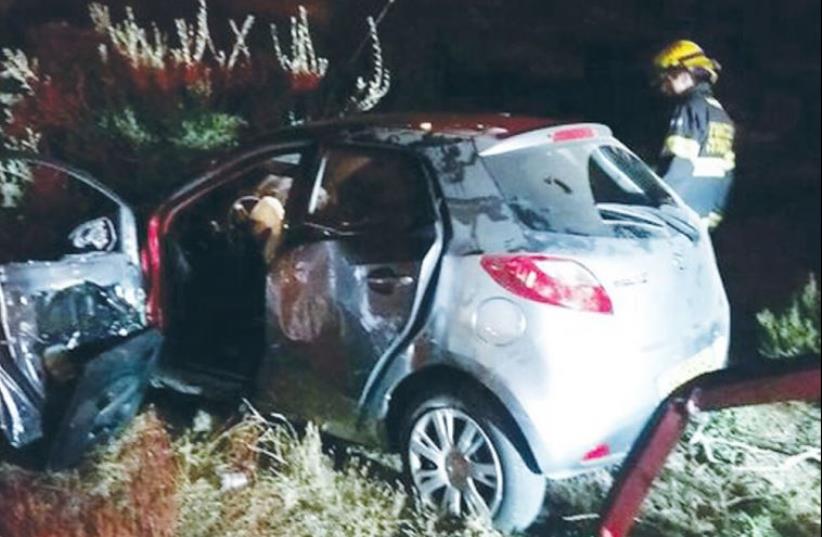 THE CAR Alexander Levlovitz (inset) was driving is seen after his fatal collision
(photo credit: ARIK ABULOFF / JERUSALEM FIRE AND RESCUE SERVICES)
Advertisement
The IDF and Israel Police sealed off the home of a terrorist who murdered Israeli driver Alexander Levlovitz in Jerusalem on Monday.Security forces surrounded the home of Abd Mahmoud Doiat, in Sur Bahir, east Jerusalem, before sealing off the structure.On Septmber 13, 2015, Levlovitz , a 64-year-old grandfather, died hours after losing control of his vehicle on the night of September 13 when its windshield was shattered by a rock thrown from an overpass in Armon Hanatziv neighborhood while he was driving home with his two daughters.An investigation determined in October the rock was thrown by youths from the neighboring Arab village of Sur Bahir. In a joint statement with the Shin Bet (Israel Security Agency), police said they arrested four suspects from the neighborhood who confessed to carrying out the deadly attack.“During interrogation by the Shin Bet, the four admitted that they planned to carry out terrorist acts, especially on Rosh Hashana, and positioned themselves so they could throw stones at passing Israeli vehicles,” police said.Doiat, who confessed to throwing the large rock that killed Levlovitz, said he wore a Hamas flag he received earlier in the month at an “Al-Aksa is in Danger” demonstration against the banning by the defense minister of two radical Muslim groups from the Temple Mount.

Daniel K. Eisenbud contributed to this report
Advertisement
Subscribe for our daily newsletter