Two IDF soldiers have died this year from heatstroke. 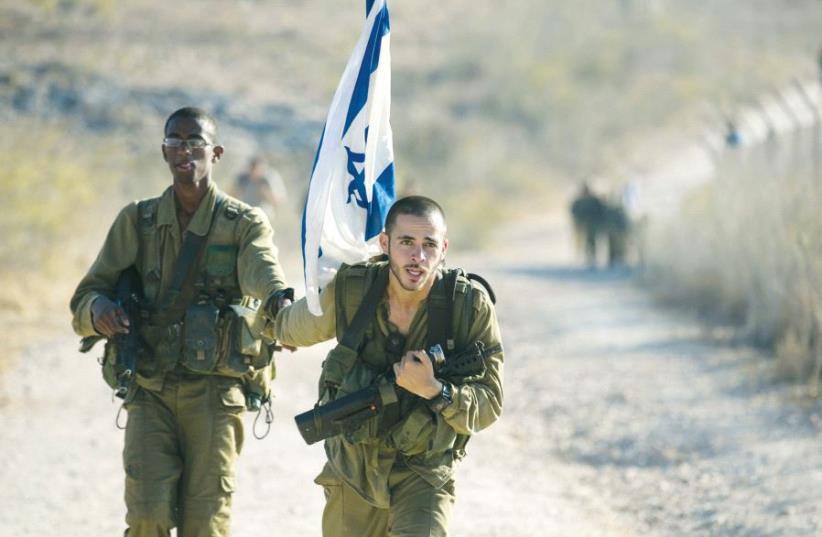 A soldier from the Golani Brigade holds a comrade’s hand as he helps him during a 70-kilometre march, marking the completion of their advanced training, at the end of which they receive their brown beret, in 2014
(photo credit: REUTERS)
Advertisement
An IDF soldier passed out due to apparently heatstroke during training in southern Israel, the IDF Spokesperson’s Office said on Sunday.The soldier received emergency medical treatment before being flown by helicopter to Soroka University Medical Center in Beersheba, where he was listed in serious but stable condition. The IDF was investigating the circumstances.Two IDF soldiers have died this year from heatstroke.Sgt. Mikhail Pesach, 21, from Migdal Ha’emek, was on a military social outing to the Yamit 2000 water park in the Tel Aviv suburb of Holon in early July when he suddenly lost consciousness. He was rushed to Wolfson Medical Center in critical condition and was declared dead shortly after by doctors.In March Capt. (res.) Elhanan Brazner died during a military race called “From Sea to Sea” where participants run from the Dead Sea to Lake Kinneret in northern Israel. Brazner complained of feeling sick after running a 4 km. run and then collapsed. He was pronounced dead by medical personnel in the field.