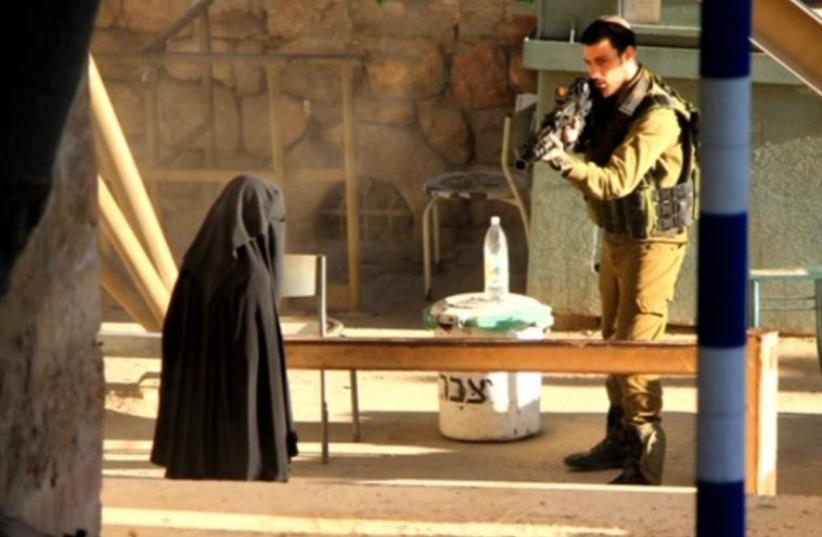 An IDF soldier aiming at Hadeel al-Hashlamun after she refused requests to put down her weapon and lunged at soldiers
(photo credit: REUTERS)
Advertisement
The IDF is investigating the shooting death of Hadeel al-Hashlamun, a Burka-clad 18-year-old Palestinian, who the army said threatened soldiers with a knife in Hebron on Tuesday morning.The military said on Wednesday that she advanced toward them – with a knife drawn – at a checkpoint, after ignoring warnings and shots fired at the ground to stop.Palestinians, however, disputed the IDF’s account, releasing photographs of the woman at the checkpoint with no apparent weapon in sight. 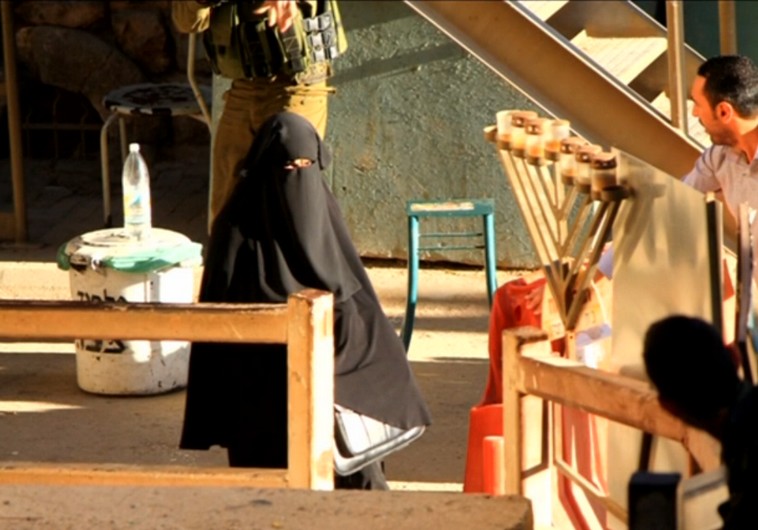 Palestinian woman is seen carrying a case as she turns her back to Israeli soldiers (Reuters)
The IDF Spokesman’s Office said shots were fired by soldiers to remove the threat posed by a woman advancing towards them with a knife.The unit “acted in accordance with expectations, and that the whole incident will be investigated,” it said.A senior army source said Hashlamun set off a metal detector at Hasam Shoter (the policeman’s checkpoint) in Hebron, which separates the Israeli and Palestinian sections of the city.She ignored requests by the soldiers to stop, and stood in a suspicious manner before advancing toward the soldiers, the source said.“Soldiers shouted for her to stop, and fired at the ground. She, nevertheless, continued to walk toward them, and pulled out a large knife. The soldiers fired at her legs, but she did not stop. At this stage, she was hit in the lower body,” the source said.Minutes after the incident, the IDF recovered the knife from Hashlamun, and published a photograph of the knife on the ground. 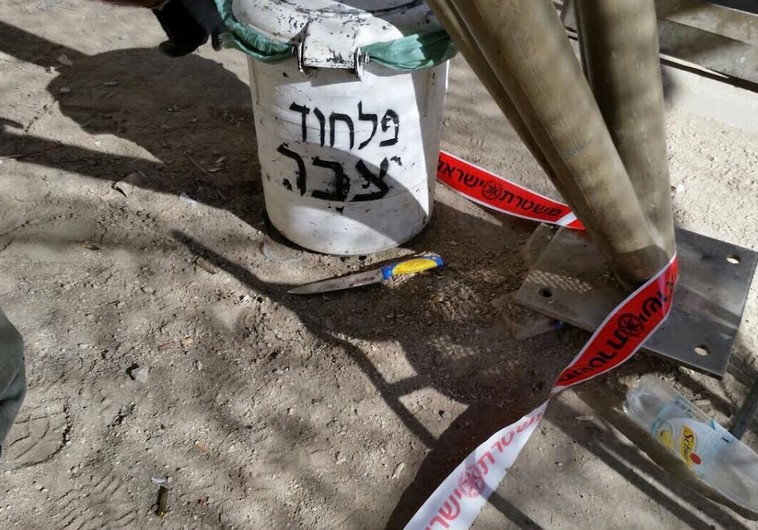 A picture of the knife the IDF says was found in possession of the woman shot at a checkpoint in Hebron. (IDF Spokesperson's Unit)
A Palestinian eyewitness disputed the IDF’s version of events, however, saying Hashlamun was confused and had not drawn a weapon.“I heard the soldiers screaming so I walked toward the checkpoint where I saw two soldiers aiming their weapons at a woman wearing all black and she was looking toward the soldiers,” said Fawaz Abu Aisheh.“I offered to help them [the soldiers] communicate with the woman because she did not speak Hebrew. I asked her to move far away from the soldiers for her safety, but one of the soldiers came close to her and prevented her from walking away and fired bullets at the ground,” Abu Aisheh said.“At this point, four more soldiers arrived at the scene, so the number of soldiers became six, aiming their weapons at her and screaming at her. I told them to give me a minute to speak to her, but they refused and one of the soldiers sniped and shot her left leg so she fell to the ground.Then he shot her right leg, and seconds later he fired four bullets at her,” said Abu Aisheh.A Palestinian group, Youth against Settlements, published a series of photographs on their Facebook page, which it said documented the incident. 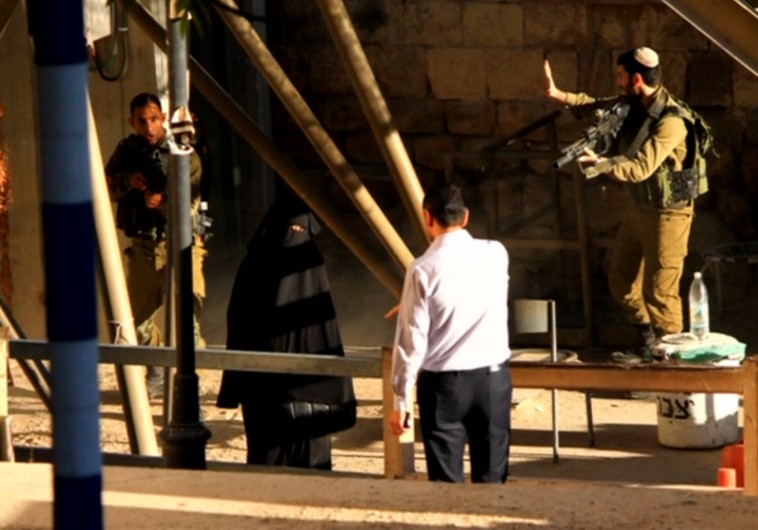 Two IDF soldiers aim their weapons at a Palestinian woman as an unidentified man looks on. (Reuters)
In one of those photographs, a soldier can be seen with his weapon drawn at Hashlamun, who is covered from head to toe in a burka with only her eyes showing. She is holding a school bag in her hand.In another picture, two soldiers have their weapons drawn at her.The photos also feature Abu Aisheh.The final photograph shows Hashlamun lying on the ground, shot in the leg. The image shows that she was wearing jeans under her burka, as well as canvas sneakers.A video published on Twitter showed the soldiers dragging her body away from the path where it initially lay, before she was taken away from the scene in an ambulance.Hashlamun’s funeral was held in Hebron on Wednesday, with mourners parading her shroudwrapped body on a gurney through the streets.Some 200 Palestinians rioted at the checkpoint and threw stones and firebombs at soldiers.A similar riot involving some 100 Palestinians occurred there on Monday.Late Monday night, near Hebron, a Palestinian man was killed when a grenade, intended to be used to harm Israeli soldiers, apparently detonated prematurely while still in his hands.A Palestinian hospital official said the 23-year-old man was showered in shrapnel and also shot in the head, though the military said it had not shot him.Islamic Jihad identified him as Diyaa Abdul Halim Talahmeh and claimed him as one of its members.It said he had been shot dead by the soldiers.Reuters contributed to this report.