A passing vehicle on the Lebanese side of the border opened fire on a group of IDF soldiers as they were patrolling. 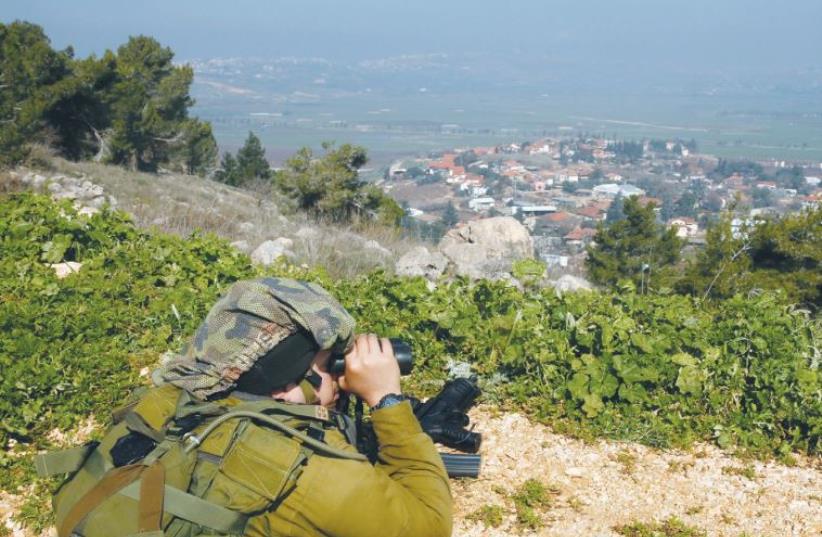 A SOLDIER near Metulla monitors Lebanon
(photo credit: REUTERS/BAZ RATNER)
Advertisement
An IDF solider was lightly injured by cross-border fire from Lebanon near the town of Metulla on Wednesday, the IDF said.According to an initial IDF investigation of the incident, a passing vehicle on the Lebanese side of the border opened fire on a group of soldiers as they were patrolling near the Reches Ramim area on the border fence.Golani Brigade soldiers returned fire hitting the vehicle, the IDF said. The wounded solider was evacuated to the Ziv Medical Center in Safed. The motivation for the attack is still under investigation.“IDF forces identified the vehicle that conducted the shooting earlier today. Fire was exchanged between the vehicle and IDF. Hits confirmed,” the IDF said on Wednesday.In the meanwhile local farmers were told to evacuate their fields near the Lebanon border.The Lebanese Armed Forces denied the IDF report telling Lebanon’s official state media, Wataniya, that “there is no truth to what some Israeli media outlets reported in terms of a car opening fire on an occupation army soldier, wounding him.”United Nations Interim Force in Lebanon said they had received a report from the IDF on the incident and urged both sides to “exercise utmost restraint."UNIFIL received information from the Israel Defense Forces that an Israel solider south of the Blue Line in the general area of Kfar Kela/Metulla was hit by a small arms fire originating from the vicinity of Kfar Kela on the Lebanese side,” UNIFIL said, adding that UNIFIL Commander Maj.-Gen. Michael Beary was in contact with LAF and IDF representatives seeking to prevent a further escalation.In July, gunfire from Lebanon struck an IDF border post near Metulla. In August, a bag full of explosives was located in a wooded area of Metulla. Defense officials said the explosives were smuggled into Israel by Hezbollah.