Forces shoot and kill suspect who runs at them with a knife, IDF says. 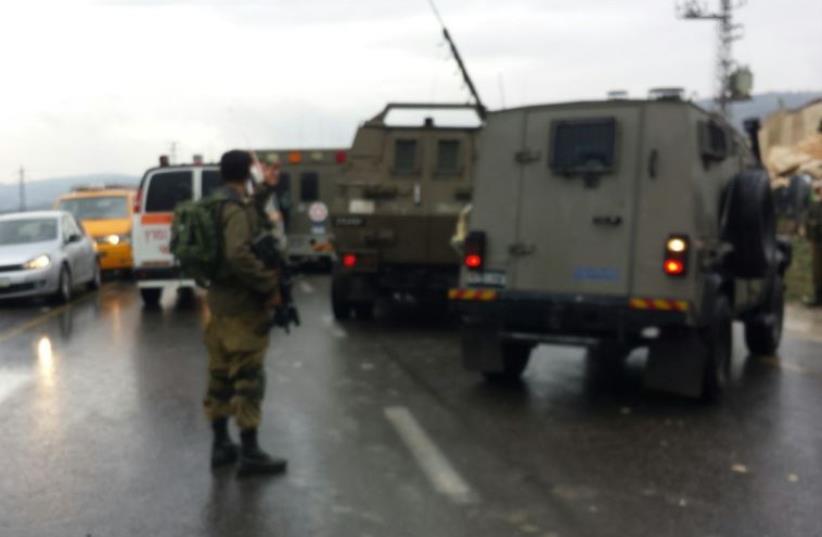 Attempted stabbing at Hawara checkpoint near Nablus, December 17, 2015.
(photo credit: DORON MAH TOV/ MIDABRIM BATIKSHORET)
Advertisement
A Palestinian man with a knife was shot dead by IDF troops at the Hawara checkpoint in the West Bank south of Nablus, the army said on Thursday.The incident began when soldiers spotted a suspicious man in the area while they were on a mission to secure a road near Hawara. Soldiers approached and questioned the suspect, at which time he produced a knife and ran towards them, the IDF Spokesman’s Office said.Soldiers opened fire on the suspect, striking and killing him. No soldiers were injured in the incident, the army said.On Wednesday, two terrorists who tried to ram their vehicles into security forces were killed in the Kalandiya Refugee Camp, and Palestinian gunmen fired on IDF soldiers during an incident-filled early morning raid.Three soldiers were lightly wounded by friendly fire when shots were fired at one of the car-ramming terrorists.A security source told The Jerusalem Post on Wednesday that although Kalandiya is a known trouble spot, the IDF will continue to “enter everywhere we see fit.”The incident is the latest in a slew of terror attacks directed against Israelis in the past two-and-a-half months that has seen more than 20 Israelis killed. Since Oct. 1, Israel has killed 67 Palestinian attackers. Palestinian sources say that an additional 46 Palestinians have been killed in clashes with the IDF and police.In a message delivered on his behalf to a conference on the “Rights of the Palestinian people,” UN Secretary- General Ban Ki-moon said the recent terrorist attacks by Palestinians against Israelis are “bred from nearly five decades of Israeli occupation.”“It is the result of fear, humiliation, frustration and mistrust,” he said. “It has been fed by the wounds of decades of bloody conflict, which will take a long time to heal. Palestinian youth in particular are tired of broken promises and they see no light at the end of the tunnel.”In his message, which was delivered on Tuesday, Ban also blamed the “settlement enterprise” for the deterioration of the situation in the region.“Jerusalem, one of the oldest cities in the world, holds shrines sacred to billions of people worldwide – Muslims, Jews and Christians alike,” he added. “What happens in Jerusalem reverberates around the world.”Ban also referred to the situation on Temple Mount and said that despite several reaffirmations by the Israeli government that it does not intend to change the status quo at the holy site, “any action which could be interpreted as attempting to change the delicate balance, and particularly the status quo of the holy sites, carries with it the risk of conflict.”Ban also said there is an “urgent need for leaders to rein in incitement” and called on Israeli security forces to “ensure a calibrated use of force in response to incidents.”At the conference – held in Jakarta, Indonesia, and organized by the UN Committee on the Exercise of the Inalienable Rights of the Palestinian People and the Organization of Islamic Cooperation on the Question of Jerusalem – Israel was also accused of conducting ethnic cleansing of Palestinians in Jerusalem. The accusation was made by Shawan Jabarin, director-general of Al-Haq, a Palestinian human rights organization.Ambassador to the United Nations Danny Danon called the UN Committee on the Exercise of the Inalienable Rights of the Palestinian People “a body detached from reality.”He also addressed Ban Ki-moon’s accusation and stressed that “there is no justification for terrorism.”“Instead of wasting your time trying to rationalize Palestinian terrorism, the United Nations should confront the Palestinian Authority to eradicate incitement coming from its highest echelons, permeating into the education system and social networks,” Danon said.Danielle Ziri contributed to this report.