While the origin of the gunfire was not immediately clear, Israel holds Hamas responsible for all aggression coming from the Strip. 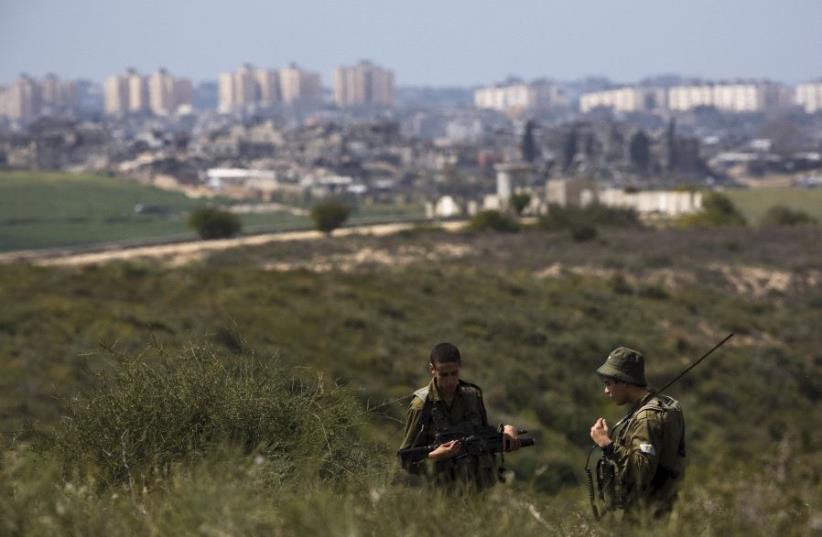 IDF soldiers near Gaza border
(photo credit: REUTERS)
Advertisement
IDF tank fire struck and destroyed a Hamas terror target in the southern Gaza Strip on Thursday shortly after shots from the Palestinian enclave were fired at Israeli forces stationed near the border, the military said. "The IDF will continue to act with determination at all times to maintain the security of the State of Israel," the IDF said in a statement on the cross-border exchange. While the origin of the gunfire was not immediately clear, Israel holds Hamas responsible for all aggression coming from the Strip.There were no initial reports of injury or damage in the incident, which came shortly after the Palestinian Authority informed the Coordinator of Government Activities in the Territories (COGAT) that they planned to immediately stop all payments for the electricity Israel supplies to the Gaza Strip.The supply of fuel for the Strip has been a source of dispute between the Palestinian Authority and Hamas since the group took control of the Strip in a bloody coup in 2007 but despite the violent takeover from the Fatah, Abbas’ government in Ramallah has until recently paid the bills.  Gaza’s sole functioning power plant shutdown last week after fuel supplied by Qatar and Turkey ran out, reducing power supply to 1.9 million residents of the Strip to just six hours of electricity followed by 12 hour blackouts. Israel supplies an estimated 30% of the electricity required in the Gaza Strip through 10 power lines which produce 125 megawatts. The cost of this energy supply, around NIS 40 million a month, was paid for by the Palestinian Authority. A senior IDF official said that the power struggle between the PA and Hamas as well as the fuel crisis in Gaza- which is already in dire straits with a lack of infrastructure and a failed economy-could lead Hamas to clash with Israel. “In a few days there will be no electricity in Gaza. They have a dilemma for the first time if to use the money for tunnels or electricity.  They have always received electricity until now but now they will have to decide what they prefer,” he said.Jpost.com Staff contributed to this report.