The announcement comes two months after the IDF ordered four battalions to join the existing forces in the territory. 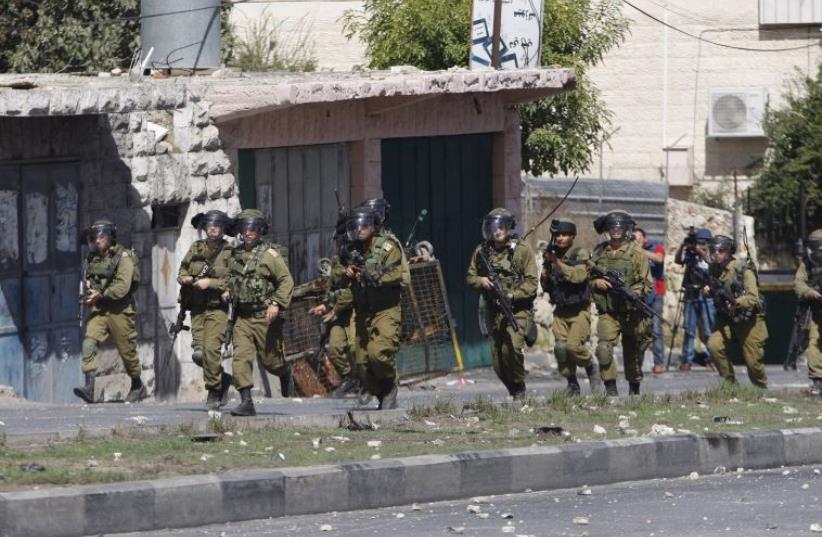 IDF soldiers take up a position during clashes with Palestinian protesters in the West Bank city of Hebron October 13, 2015
(photo credit: REUTERS)
Advertisement
The IDF announced Sunday it would send four additional battalions to the West Bank, following an evaluation of the security situation.The announcement comes two months after the IDF ordered four battalions to join existing military forces in the West Bank in the wake of ongoing Palestinian terrorism and rioting. The violence is not expected to abate anytime soon.Two reserves battalion will be drafted as planned at the start of 2016 and be deployed to Judea and Samaria, and two conscripted battalions will enter the area as well, the IDF Spokesman’s Office said.More steps to beef up security forces may occur in line with future evaluations, the military added.By late October, it was clear to senior IDF commanders that Palestinian attacks are set to continue for a lengthy period, and they began making preparations accordingly.“We are preparing for this to continue,” one senior source from the Home Front Command, which deploys battalions to the West Bank, told The Jerusalem Post in late October. “It won’t pass in two days. This can escalate and decrease in strength. We have to be prepared. It can go in any number of directions. We have to be ready for all scenarios.”