The American-funded Palestinian security forces in jet-black uniforms had some minor confrontations with disgruntled pedestrians as their matching jet-black Ford Super Duty Truck blocked a roadway. 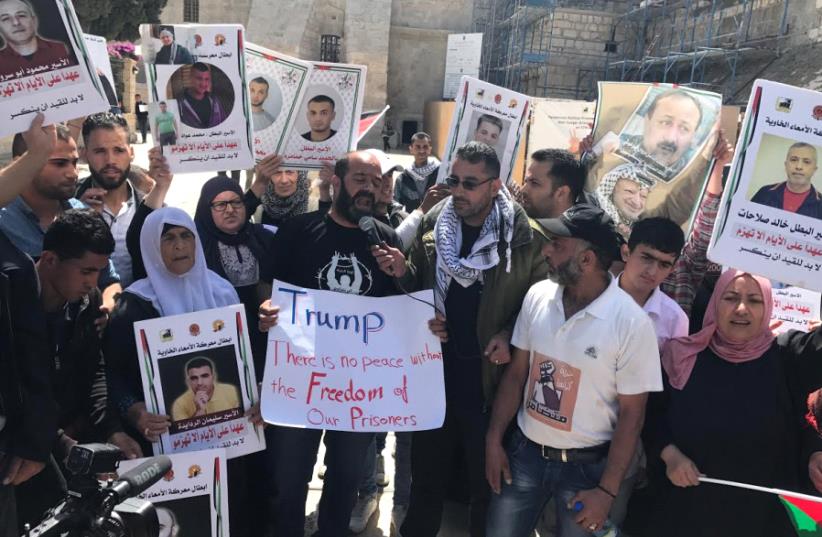 In Bethlehem prisoners take precedence over Trump
(photo credit: ELIYAHU KAMISHER)
Advertisement
On Tuesday, as US President Donald Trump quickly made his way to a meeting with PA President Mahmoud Abbas, a mannequin locked in a cage stood near Bethlehem’s Church of the Nativity.“Trump, we demand immediate action for our prisoners,” a sign on the cage said.Meanwhile children and mothers chanted in the city’s main gathering space, Manger Square: “With spirit and with blood, we will sacrifice ourselves for you, oh prisoners.”A Palestinian security prisoners’ hunger strike, led by imprisoned Fatah leader Marwan Barghouti, entered its 37th day on Tuesday.Barghouti, convicted of five counts of murder, said he is seeking improved conditions in Israeli prisons, while Israel says he is using the strike as a tool to increase his standing in Palestinian politics. The Palestinian Authority also faces strong criticism from Israeli and US officials for paying salaries to the families of convicted terrorists.“This [Trump’s visit] could be a breakthrough on the hunger strike,” said Akram Alayasa, a spokesman for the PLO Prisoners’ Commission, who spoke from Manger Square Monday night. “This is part of their interest in Trump coming. If he is coming on another day you might not see anyone here.”A large sign across the street from the Bab Al-Zqaq pharmacy greeted Trump’s convoy with “the city of peace welcomes the man of peace,” as a contingent of 700 elite Palestinian Presidential Guard forces secured the final route to the Bethlehem governor’s office. The American-funded Palestinian security forces, in jet-black uniforms, had some minor confrontations with disgruntled pedestrians as their matching jet-black Ford Super Duty Truck blocked a roadway.“More important than Trump, we need our roads to be paved,” said Rami Jod, 17, who walked nearly 40 minutes to school due to the road closure.“There’s no hope,” said Shaim Zoa, 18. “The US is always on Israel’s side.”Thaer Mahmoud, 31, an employee at the Cairo Amman Bank said he thought Trump’s visit is a positive step.“He believes in peace and wants two states,” said Mahmoud.“He was a success in business, so he can be a success here.”Rumors floated in the streets about the visit. “Ivanka and Melania will visit the Church of the Nativity,” said Sami a coffee vendor. “I’m the coffee man. I hear everything.”Artemio Vitores Gonzalez, an Italian priest at the church, was waiting around to see if the rumored visit would come to fruition. “Do you know anything?” he asked. Gonzalez said he was “disappointed” that after an extensive security inspection of the church by American officials Trump did not visit. “Of course we are disappointed. This is Bethlehem and all of humanity for us started here over 2,000 years ago,” he said.Still Trump’s visit did provide some optimism for Palestinians after Abbas spoke of the prisoner issue with Trump.“[The prisoners’] demands are humane and just, and I call on the Israeli government to respond affirmatively to these humane and legitimate demands,” Abbas said.“This is a good thing,” said Munkid Abu Atwan a former prisoner. “We hope that Trump will put pressure on Netanyahu to end the prisoner strike.”